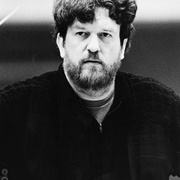 Born in Glasgow in 1952, Oliver Knussen grew up near London, where his father was a double bass player with the London Symphony Orchestra. Knussen began his conducting career with them in April 1968, conducting his own first symphony in London and in New York City’s Carnegie Hall.

Knussen studied composition with John Lambert at the Central Tutorial School for Young Musicians (1964-1967), then traveled to the United States to study in Boston under the direction of Gunther Schuller (1970-1973) at Tanglewood, where he won three prizes.

Between 1970 and 1975, he traveled back and forth between the two countries; his music was widely performed and his reputation quickly grew on both sides of the Atlantic. The first version of Hums and Songs of Winnie-the-Pooh premiered in 1970. His Second symphony was awarded Tanglewood’s Margaret Grant Prize in 1971. In 1972-1973, Océan de Terre premiered, and in 1975, the Koussevitsky Foundation commissioned his Ophelia Dances for the Koussevitsky’s centenary birthday.

Knussen settled in England in 1975, and his Third Symphony (1973-1979) was a huge success with the BBC Proms. Performed more than a hundred times, the symphony is now considered to be one of the landmark compositions of this period.

In the 1980s, Oliver Knussen began work on two operas produced by the Glyndebourne Festival Opera, in collaboration with Maurice Sendak: Where the Wild Things Are (1979-1983) and Higglety Pigglety Pop! (1984-1990).

Between 1983 and 1988, he served as director of the Aldeburgh Festival, and then of the Tanglewood Contemporary Music Festival at the Tanglewood Music Center from 1986 to 1993. From 1990 to 1992, he held the Elise L. Stoeger chair of composition at the Lincoln Center Chamber Music Society in New York City. In 1992, he was principal guest conductor of The Hague’s Het Residentie Orkest (Resident Orchestra) That same year, he and Colin Matthews founded the contemporary composition and performance course of the Britten-Pears School for Advanced Musical Studies in Snape, Suffolk, where he made his home. In 2014, he became the first Richard Rodney Bennett Professor of Music at London’s Royal Academy of Music.

Knussen had an illustrious career as an orchestra conductor, leading ensembles such as the London Sinfonietta, the BBC Symphony Orchestra, and major orchestras in the United Kingdom, the United States, Canada, Holland, and Japan, as well as contemporary music ensembles such as Ensemble Modern and Avanti!. After several years of collaboration with the London Sinfonietta, he took over as its director in 1998. In 2006, he became an artist-in-association with the Birmingham Contemporary Music Group, as well as with the Southbank Centre of London, where in 2008 he directed the Klang Festival, which was held in memory of Karlheinz Stockhausen. He held a three-year residency with the BBC Symphony Orchestra starting in 2009.

Knussen received many awards and honors in his lifetime. He was an honorary member of the American Academy of Arts and Letters and the Royal Philharmonic Society; he received an honorary doctorate from the Royal Scottish Academy of Music and Drama, the Association of British Orchestras Award, and the British Composer Award for Requiem, Songs for Sue in 2007. This piece, written in memory of his wife, was preceded by a number of other pieces that became a part of the major classical repertoire from the moment they premiered, including Flourish with Fireworks (1988), The Way to Castle Yonder (1988-1990), Songs without Voices (1992), Two Organa (1994), his concertos for horn (1994) and for violin (2002), and Cleveland Pictures for orchestra (2003), as well as Ophelia’s Last Dance for piano (2004).