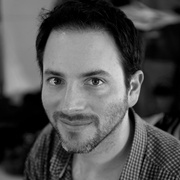 Ofer Pelz studied piano at the Rubin Conservatory in Haifa, and later graduated from the music department of Wizo High School for Arts (1996). In 2002, he began studying at the Jerusalem Academy of Music and Dance, graduating with a Master’s degree in composition (with honours) in 2008. He spent the following three years in Paris, during which he studied instrumental and electroacoustic composition with Philippe Leroux, Thierry Blondeau, and Gilles Racot at the Blanc Mesnil Conservatory and the Paris Conservatoire (CNSMDP). He also participated in the ManiFeste Academy Workshop for Computer Music, led by Mauro Lanza and Philippe Manoury. Pelz is currently enrolled in the music composition doctoral programme at Montreal University, working under the supervision of Ana Sokolovic, Caroline Traube, and Robert Normandeau.