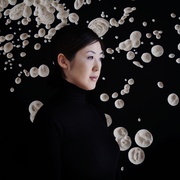 Noriko Baba was born in Japan in 1972 and holds a masters in composition from the Tokyo National University of Fine Arts and Music and studied composition, orchestration, acoustics, analysis, and ethnomusicology at the Paris Conservatory (CNSMDP), where she graduated with highest honors in composition and orchestration.

She participated in Cursus (the IRCAM’s composition and computer music course) and in Voix Nouvelles at the Fondation Royaumont. She has received many grants and fellowships, including from the Akiyoshidaï International Art Village, the Sacem, the Akademie Schloss Solitude in Stuttgart, and the Casa de Velazquez in Madrid. She won second prize in the NHK-Maïnichi Composition Competition, the Georges Wildenstein Prize of the Académie des Beaux-Arts of the Institut de France, the Gret International Composition Prize of the Takefu Festival. Her piece Pororoca, written for the Ensemble Intercontemporain, was filmed by Michel Follin and broadcast on ARTE.

After meeting Ryoko Aoki, one of the few actresses of Noh theatre, the composer began to reflect on this traditional art form, from which the pieces Oiseau à deux têtes (2012), AOI - Nôpéra (2015) and Hagoromo Suite (2017) emerged. She also has a passion for early music: she composed the pocket opera Occhi, un tempo mia vita (2018), inspired by the first madrigal book of the Roman composer Michelangelo Rossi (1601-1665) and a Doppio trio (2016).