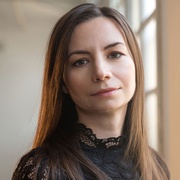 Nina Šenk studied composition with Pavel Mihelčič at the Ljubljana Music Academy, and later in Dresden with Lothar Voigtländer. In 2008, she obtained a Master’s degree from the Munich University of Music and Performing Arts under the tutelage of Matthias Pintscher. From 2008 to 2010, she was composer-in-residence with the Staatstheater Cottbus Orchestra in Germany.

Šenk has been awarded numerous accolades, including the European Prize for the Best Composition at the Young Euro Classic Festival for her Violin Concerto in 2004, a Prešeren Prize from the Ljubljana Academy of Music, and first prize at the Weimarer Frühjahrstage for Movimento fluido in 2008.