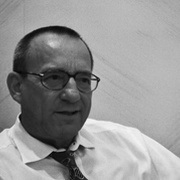 German composer born in 1939 in Passau.

Nicolaus A. Huber was born in Germany in 1939. He studied piano at the Musikhochschule of Munich with Oscar Koebel from 1958 to 1962, and composition with Franz Xaver Lehner from 1962 to 1963, then with Günter Bialas from 1964 to 1967. He worked in the Munich electronic music studio in 1965-1966 with Josef Anton Riedl, and was a member of his ensemble from 1969 to 1971. He continued his training with Karlheinz Stockhausen in Darmstadt and then with Luigi Nono in Venice.

In 1969, he was awarded the culture prize of the City of Munich, and the Darmstadt composition prize in 1970. From 1971 to 1974 he was vice-president of the GNM, the German section of the International Society for Contemporary Music. He began teaching at the Folkwang-Hochschule in Essen in 1969, and was appointed to the position of professor there in 1974, a position he held until 2004. He also taught at the Musikhochschule of Munich and in the Darmstadt Summer Course in 1988. He also participated in numerous composition classes, workshops, and master-classes; numerous concerts have been devoted to his work both in Germany and abroad (Austria, Equador, South Korea, Greec, Hungary, Italy, Japan, Portugal, Sweden, Switzerland, Uruguay, Venezuela, etc.) Since 1993, he has been a member of the Berlin Academy of Arts and the Leipzig Academy of Arts. In 2007, he was awarded the Gerda and Günter Bialas Composition Prize by the Bavarian Academy of Fine Arts.

In the works he composed in the 1960s, Huber sought to refine and streamline musical language. Critical of the legacy of serialism and its strict multi-parametric organization, he developed his compositions using simple cells: von … bis … (1966), Traummechanik (1967), Informationen über die Töne e-f (1965-1966).

After encountering Nono, with whom he shared an interest in politics, Huber collaborated with Peter Maiwald from 1975 to 1980 on an independent theater company, performing in shows and political events in West Germany; his work from this decade was politically inflected and influenced by Marxist thought: Harakiri (1971), Anerkennung und Aufhebung (1971), or Banlieue (1972-1973).

His compositions from the 1970s are characterized by a focus on rhythm. Starting with Darabukka for piano (1976), Huber describes his pieces from this era as “rhythmic compositions,” and in them, he mixes rhythmic complexity with popular material. His Presente (1979) for trombone explores the rhythm of a marching band, while Morgenlied (1980) for orchestra is built on a Cuban rhythmic model.

From the end of the 1970s, his work showed an increasing interest in the possibilities of post-modernism. Huber paid tribute to the language of Beethoven, Sechs Bagatellen (1981), and Schumann: Demijour (1985–1986) contains references to Schumann’s Zwielicht op. 39 n° 10, and Air mit ‘Sphinxes’ (1987) references the composer’s Carnaval. More recently, An die Musik (2010) contains nods to Schubert. Huber’s compositions are also inspired by the aesthetics of Bretch, Eisler, and Hölderlin – Eröffnung und Zertrümmerung, An Hölderlin’s Umnachtung (1992) – as well as Duchamp – En face d’en face (1994) Covered with music (1997), and Rose Selavy (2000) - and Warhol – To ‘Marilyn Six Pack’ (1995).

As is true of many of his works, Go ahead (1988) plays with repetition and the eruption of the unpredictable. His music makes use of any situation or context with actions and with non-musical sounds; in some, the audience is called to participate, as in Go ahead, whose subtitle includes “with shrugs.” In Ach, das Erhabene… (1999), the sound created by the pop corn the audience is invited to eat during the performance is a part of the composition.

In 2009, Nicolaus A. Huber was appointed Professor at the Lübeck University of Music. Since 2019, he is an honorary member of the Bayerische Akademie der Schönen Künste.