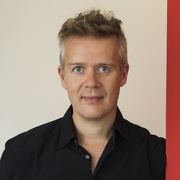 Michel van der Aa is a multidisciplinary composer who began his career as a recording engineer at the Royal Conservatory in the Hague. He studied classical guitar under Antonio Pereira Arias and composition with Diderik Wagenaar, Gilius van Bergeijk, and Louis Andriessen.

In 2002, having already written some twenty pieces, he journeyed to New York to study film directing at the New York Film Academy, continuing his work in the performing arts with a course in stage direction with the Lincoln Center Theater Director’s Lab. Enriched by this training, he began creating musical theater pieces for which he acted as composer, video producer, and director. This is the case with The Book of Disquiet (2008) but also with the operatic triptych composed of After Life (2006), Sunken Garden (2013) and Upload (2020), where the film occupies a primary place. The latter explores the science-fiction theme of mind uploading, invested as early as 1956 by Arthur C. Clarke. Michel van der Aa has also written music for dance performances (Solitaire, Faust, Staring at the Space) and makes extensive use of electronics.

His works are published by Boosey & Hawkes.