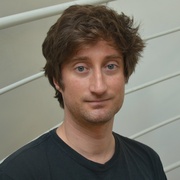 Maxime Mantovani holds a Master’s degree in composition from the Lyon Conservatoire (CNSM), where he studied electroacoustic and mixed music with François Roux. He has also undertaken studies of electrical engineering and information technology. In 2018, he was awarded a grant from Société Générale to finance the construction of digital audio controller interfaces. In 2019, with a grant from SACEM, he participated in the IRCAM Cursus (IRCAM’s composition and computer music course).

A trained guitarist, Maxime Mantovani is influenced by rock and jazz; for example, he took inspiration from the harmonic and melodic circles of fourths used by John Coltrane in Giant Steps in his work Stépologie (2017). He is also active as an improviser, and spent an extended period in San Francisco performing in this capacity. He has founded two musical collectives in which improvisation is a key element.

Science is the starting point for several of his works, such as Profondo blu (2015), a collaboration with bio-acoustician Olivier Adam based on recordings of cetaceans, and Cènorama (2019), a work whose structure emulates the chronologies in theories of anthropocenic bio-evolution, i.e., the demise of humanity in a catastrophe and the subsequent rebirth of the world by 2050. The latter piece is exemplary of the way Mantovani uses subject matter to inform formal organization. This work also served as a medium through which Mantovani was able to reflect on the role of the composer in the world and the sustainability of his/her tools and technologies. Like Cènorama, Aux Âmes (2018) also explores the theme of future global catastrophe, while Existentia (2019), his final IRCAM Cursus project, deals with the notion of absence.

Maxime Mantovani develops his own tools and software for the creation of his works. Deeply interested in the relationship between composer and performer, he also constructs his own electronic instruments, tailor-made for specific performers, betraying a deep interest in the corporeality of performance. His creative research focuses on “mechanisms of opposition and union between sounds and timbres of varied character […] with the objective of achieving a coherent mixture of electronic and acoustic sounds.” As such, works with electronics make up a large part of his catalogue. The digital tools he develops are also intended to serve in improvisatory settings, in accompanying instrumentalists and while composing in the studio. “These physical interfaces and software allow [me] to achieve the kind of flexibility and malleability in terms of manipulating audio material that one would associate with an analogue studio.” To this end, he often uses analogue synthesisers (Kobol, Leipzig, Jupiter) in his works, e.g., Leipzig fait face à Jupiter (2013) and Dock Strasse (2014).

Mantovani’s works are published by BabelScores.