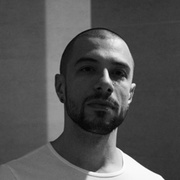 Marko Nikodijevic studied composition with Zoran Erić and Srdjan Hofman at the Belgrade University of Arts from 1995 to 2003, concurrent to his studies of mathematics and nonlinear physics. He subsequently moved to Stuttgart, where he undertook further study of composition with Marco Stroppa at the Hochschule für Musik und Darstellende Kunst from 2003 to 2005. In 2008 and 2009, he took private music theory lessons with Bernd Asmus. He also attended masterclasses in Apeldoorn, Visby, Weimar, Amsterdam, Salzwedel, and Baden-Baden. In 2012-2013, he was a resident at the Cité Internationale des Arts in Paris.

He has received numerous prizes, including the Composition Prize at the Brandenburg Biennale, the Gaudeamus Prize in 2010 for cvetić, kućica … / la lugubre gondola, the Ernst von Siemens Foundation Music Prize in 2013, and the GEMA Deutscher Musikautorenpreis (in the “New Talent” category) in 2014.

Nikodijevic applies fractal theory in his works, and regularly combines concert instruments with computer-generated sounds, often drawing inspiration from techno. Many of his pieces are based, in part or in their entirety, upon recordings of pre-existing works which have been digitally compressed or stretched. For example, music box / selbt portrait was composed using algorithms and fractal processes to transform recordings of works by György Ligeti; cvetić, kućica … / la lugubre gondola is based on Franz Liszt’s La lugubre gondola (1883) for piano; and chambres de ténèbres / tombeau de claude vivier makes use of the musical language of the Canadian composer.

The majority of Nikodijevic’s music is for chamber ensemble. Notable works include ketamin/schwarz for ensemble and electronics, premiered in 2012 by Ascolta Ensemble at the Donaueschinger Musiktage, and K-hole/schwarzer horizont, premiered in Paris by Ensemble Intercontemporain in 2014. His chamber opera on the life of Claude Vivier, Vivier - Ein Nachtprotokoll, was premiered at the Munich Biennale in 2014, and his first string quartet, tiefenrausch, was premiered in London by the Armida Quartet in 2016.

In 2018, he was invited to participate in the ManiFeste Academy and Festival at IRCAM.