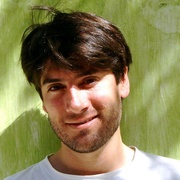 Luis-Fernando Rizo-Salom obtained a Master’s in composition from the Pontifical Javeriana University in Bogota in 1998. In 2000, he moved to France to pursue further study with Emmanuel Nunes at the Paris Conservatoire (CNSMDP). He went on to participate in the IRCAM Cursus (IRCAM’s composition and computer music course) in 2005, during which he composed Big Bang for viola and electronics.

From 2005 to 2007, Rizo-Salom was composer-in-residence at Casa Velazquez in Madrid. He received grants from the Nadia and Lili Boulanger Foundation, the Colombian government, Villecroze Academy, and the Meyer, Tarrazi and Legs Saint-Paul Foundations, and commissions from the Shizuoka Concert Hall (Japan), the French Ministry of Culture, Ile-de-France National Orchestra, the Larzac Festival, SACEM, IRCAM, Radio France and the Steirisches Kammermusik Festival. He was awarded numerous prizes, including the International Forum of Young Composers Prize in 2002 (Canada), the Salabert Foundation Prize in 2004, the Evry University Prize, the Georges Wildenstein Prize (from the French Academy of Fine Arts), and the Paso al Arte Prize (Colombia). His catalogue comprises pieces for chamber ensemble and orchestra, as well as electroacoustic works, which have been performed by esteemed ensembles and soloists such as Ensemble Intercontemporain, Court-Circuit, Itinéraire, 2e2m, Nouvel Ensemble Moderne, Studio New Music (Russia), Remix (Portugal), the Ile-de-France National Orchestra, Christophe Desjardins, Peter Rundel, Mark Foster, Lorraine Vaillancourt, Jean Deroyer, Pascal Rophé, Susanna Mälkki, and Pierre Roullier. His works have been performed in new music festivals in Colombia, France, England, Russia, Austria, Italy, Portugal, Spain, Germany, and Canada, and broadcast on Canadian, French, and Colombian National Radios.

In 2013, a monographic CD of his chamber works was produced by the Luis Angel Arango Concert Hall in Bogota, with support from the National Bank of Colombia.

Luis-Fernando Rizo-Salom died in a hang gliding accident in 2013, a sport in which he was champion of France in 2011.