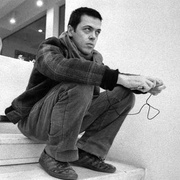 Lorenzo Bianchi Hoesch was born in Italy in 1973. He studied architecture at the Polytechnic University of Milan, and received his masters in 2002. He then studied composition with Jacopo Baboni Schilingi and electroacoustic composition with Hans Tutschku at the Conservatoire de Montbéliard, from which he graduated in 2006. While in Milan, he studied clarinet and piano, and in 2000 took part in a master class with Gianluigi Trovesi at the National Academy of Jazz in Siena.

He has taught electroacoustic composition at the Université de Franche-Comté since 2004, and at the Conservatoire de Montbéliard since 2005. He has worked with the IRCAM as a RIM (computer music designer) for several productions since 2009.

He received the SACEM Composition Prize in 2006 for Loop for harp and electronics, and in 2009 was the winner of the 8th Concours International d’art radiophonique Luc Ferrari for Ouest profond for trombone and electronics.

Lorenzo Bianchi Hoesh’s performances are built around improvisation with live electronics, both solo and with other musicians. He also composes instrumental pieces with live electronics, as well as music for 3-D sound. He collaborates with other artists in theater, cinema, installation art, and dance (notably with choreographers Richard Siegal and Michele Di Stefano). He also writes music for electronic music labels.

He has received commissions from the Venice Biennale, the Festival Sant’Arcangelo, the Roma Europa Festival, the Groupe de Recherche Musicale, the Göteborg Opera, the Aterballetto company, and the Ballet National de Marseille. His pieces have been toured around the world, in Europe, Japan, Indonesia, and the United States.

In 2016-17, Lorenzo Bianchi Hoesch was an artistic research resident at the IRCAM. His research focused on interactive, social, and participative installations, culminating in an installation titled Square, which was presented at the ManiFeste festival in 2017.