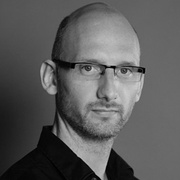 French composer and bassoonist born in 1976 in Paris.

He composes for a wide range of formations, from soloists to symphony orchestras. He has received commissions from Ensemble intercontemporain, the Orchestre de Paris, the TM+, Multilatérale, and Utopik ensembles, Radio France, the Orchestre Poitou-Charentes, the Quatuor Habanera, and the Duo Maderas. He has also collaborated with ensembles such as Berlingot, Nomos, Smash, Multilatérale, and Quatuor Byron, as well as conductors such as Guillaume Bourgogne, François-Xavier Roth, Arie Van Beek, Alexandre Bloch, and Christoph Eschenbach.

In 2004, he composed Nébuleuses… for four soprano saxophones, a commission for the Quatuor Habanera that was recorded by Luis Sclavis. In 2007, the Orchestre de Paris commissioned Fulgurances for eight cellos, as well as a transcription of Berlioz’s Nuits d’été for voice and eight cellos. In 2011, Ensemble Intercontemporain premiered 666, a trio for clarinet, cello, and piano. More recently, Radio-France commissioned a piece for orchestra, Shortcuts (2014), as well as a chamber music piece for six musicians titled Folia (2017, co-commissioned with Ensemble intercontemporain). Bord is also the author of many transcriptions and orchestrations.