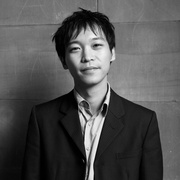 Japanese composer born in 1977 in Osaka.

Following studies of piano and composition with Yoko Kubo and Kei Kondo, Kenji Sakai enrolled at the Kyoto City University of Arts, where he studied composition with Syuichi Maeda and Hinoharu Matsumoto, graduating with highest honours in 2000. In 2002, he moved to Paris, where he studied composition with Frédéric Durieux, Allain Gaussin, and Marco Stroppa, electronic music and computer-aided composition with Luis Naón, and analysis with Michaël Lévinas and Claude Ledoux at the Paris Conservatoire (CNSMDP). Upon graduating in 2006, he undertook two years of further study at the Geneva Conservatory with Michael Jarrell. In 2007-2009, he participated in the IRCAM Cursus (IRCAM’s composition and computer music course), where he notably studied with Yan Maresz. While at IRCAM, he composed Astral/Chromoprojection for percussion, ensemble and electronics; the work was premiered in October 2009 at the Pompidou Centre by Ensemble Intercontemporain, Jean Deroyer conducting. Subsequently, Sakai’s works were premiered by ensembles and orchestras such as Contrechamps, Itinéraire, Sillages, Tokyo Philharmonic Orchestra, and the Tokyo Sinfonietta.

In May 2011, Nebulous Nix was premiered by the Lucerne Symphony Orchestra with Jonathan Nott conducting. Following the premiere of Fog and bubbles at the GRAME Musique en Scène Biennale in Lyon in March 2012 by Ensemble Orchestral Contemporain (Daniel Kawka, conducting), the work was reperformed at IRCAM and in the Archipel Festival.

Kenji Sakai has received numerous prizes, including the Japan Music Competition Prize for Chronofaille I and Mémoire d’oubli in 2002 and the “Grand Prix” in the George Enescu International Competition for …Rhizomes… and …Chaosmose in 2007. He was awarded grants from the Nomura Foundation (Japan) and SACEM for Astral/Chromoprojection in 2008-09, and from the Lucerne Art Mentor Foundation in 2010. In 2009, Helmut Lachenmann awarded his work Hexagonal pulsar first prize in the Toru Takemitsu International Composition Competition.