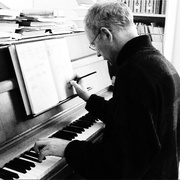 Jürg Frey was born in Switzerland in 1953. He studied clarinet with Thomas Friedli at the Conservatoire de Musique de Genève and composition with Urs Peter Schneider in Bern. He began his professional life as a clarinetist before devoting more of his time to music.

In 1991, he won the Boswil International Composition Competition (Switzerland).

Since 1993, he has been a member of the Wandelweiser Komponisten Ensemble, an instrumental formation of composer-musicians that has performed for more than fifteen years in Europe, North America, Japan.

He has been invited to give composition workshops at the Universität der Künste Berlin, the Universität Dortmund and on several occasions at Northwestern University (Illinois) and the California Institute of the Arts (CalArts). In 2015, he was composer-in-residence at the Huddersfield Contemporary Music Festival, where several of his recent compositions were performed.

His pieces have been performed at the Düsseldorf Kunstraum, Wandelweiser in Residence in Vienna, the Rheinisches Musikfest (Cologne), MaerzMusik (Berlin), Ny Music Boras (Sweden), Q-O2 (a laboratory for experimental music and sound arts in Brussels, Belgium), and the Other Minds Festival of New Music (San Francisco).

In addition to his work as a composer and performer, Jürg Frey teaches clarinet and organizes Les Moments Musicaux, a forum for contemporary music in the city of Aarau, where he makes his home.

His musical language is made up of vast soundspaces in which silence is an essential component.

His music is published by Wandelweiser.