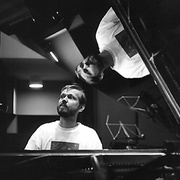 Born in 1948, Jukka Tiensuu studied in Helsinki, at Julliard in New York, in Fribourg and at IRCAM in Paris. His catalogue comprises pieces for solo kantele (a traditional Finnish plucked string instrument), choir, orchestra, accordion ensemble and electro-acoustic works. As a pianist, harpsichordist and conductor, his knowledge of repertoire extends from the Renaissance to contemporary works. He was Director of the Helsinki Biennale from 1979 to 1983, and founded the Viitasaari Festival. He also taught chambre music and composition at the Sibelius Academy in Helsinki, and electronic music at IRCAM. Notable works include Aspro for clarinet, trombone, cello and piano (1975), Tokko for choir and tape (1987), Plus II for clarinet and cello (1992), Arsenic and Old Lace for harpsichord and string quartet (1990), Manaus for kantele (1988) and Vento for clarinet ensemble (1995).