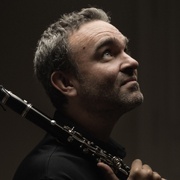 German composer and clarinetist, born in Munich in 1973.

Jörg Widmann studied clarinet at the Munich Hochschule für Musik with Gerd Starke, and then at Julliard in New York with Charles Neidich in 1994-1995. He began studying composition at the age of 11, first taking lessons with Kay Westermann. From 1994 to 1996, he studied with Wilfried Hiller and Hans Werner Henze, and from 1997 to 1999, with Heiner Goebbels and Wolfgang Rihm in Karlsruhe.

Passionate about chambre music, Jörg Widmann regularly performs with musicians such as Tabea Zimmermann, Heinz Holliger, András Schiff, Kim Kashkashian, and Hélène Grimaud. He has premiered clarinet concertos including Musik für Klarinette und Orchester by Wolfgang Rihm in 1999 and Rechant by Heinz Holliger at the Lucern Festival in 2009.

In 2001, Widmann succeeded Dieter Klöcker as clarinet professor at the Freiburg Staatliche Hochschule für Musik, and since 2009, he has also taught composition at this institution.

He has composed many works for chambre ensemble, including string quartets, such as Jagdquartett (2003), premiered by the Arditti Quartet; Choralquartett (2003); and Versuch über die Fuge (2005) for quartet and soprano. Three works inspired by vocal music, Lied (2003, revised in 2007), Chor (2004), and Messe (2005), collectively form a large-scale cycle for orchestra. His catalogue also comprises concertos, including two for clarinet, Echo-Fragmente and Elegie (2006), and others for various instruments making up the Lichtstudie cycle: Polyphone Schatten, Lichtstudie II (2001) and Lichtstudie I-VI (2004). In 2007, Armonica for orchestra with glass harmonica was premiered by Pierre Boulez and the Vienna Philharmonic. His theatrical works have brought him great acclaim. Das Gesicht im Spiegel (2003) was chosen by Opernwelt magazine as the best premiere of 2003-2004. In 2008-2009, he composed the music for a production devised by painter and sculptor Anselm Kiefer, Am Anfang, commissioned by Gérard Mortier to celebrate the 20th anniversary of the opening of the Bastille Opera.

Among his various accolades, Jörg Widmann has received the Forberg-Schneider Belmont Prize (1998), the Louis Spohr Medal of the City of Seesen am Harz (2001), the Schneider-Schott Music Award (2002), the Hindemith Prize (2002), the Ernst-von-Siemens Prize (2003), and the Prize of Honour from the Munich Opera Festival (2003). In 2004, he was awarded the Arnold Schoenberg Prize, and in 2005, he was named as a member of the Bavarian Academy of Fine Arts. His work for orchestra, Zweites Labyrinth, was awarded the SWR Baden-Baden and Freiburg Symphony Orchestra Composition Prize in 2006. Also in 2006, he received the Claudio Abbado Prize, and the following year, the Christoph and Stephan Kaske Foundation Prize. In 2008, he was composer-in-residence at the Siemens Arts Program in Dubai, during which he composed Dubairische Tänze. In 2009, he received the Lincoln Center Chamber Music Society Elise L. Stoeger Prize, and in 2010, the Marsilius Prize from the Ruprecht-Karls University in Heidelberg. Finally, in 2018, he was awarded the Robert Schumann Prize for music and poetry by the Mayence Academy of Science and Literature.

In 2013, he was artist-in-residence at the Rheingau Musikfestival. In 2016, he became a member of the Mayence Academy of Science and Literature, and in the following year, was named as both head conductor of the Irish Chamber Orchestra and Professor of Composition at the Barenboim-Said Academy in Berlin.