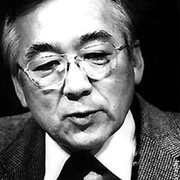 Joji Yuasa was born in Koriyama in 1929. After studying medicine, Yuasa decided to pursue music, studying composition at the “Experimental Workshop” in Tokyo (1951-1957). Arguably the most prominent Japanese composer of his generation after Takemitsu, Yuasa played a significant role in the development of the electro-acoustic music scene in Japan during the 1950s, and remains one of the most influential experimental composers in his home country to this day.

Along with Ichiyanagi, Matsudaïra, Takemitsu, and others, Yuasa was a member of the “TranSonic” group. He has composed the scores for many documentaries and experimental films, and has spent considerable time teaching abroad, i.e., in Germany and Canada, and in San Diego from 1982. He was in residence at IRCAM in 1988, culminating in the premiere of his work, Nine Levels by Ze-Ami, for seventeen musicians and tape.

His music is characterised by an acute sensitivity to sound colour and a highly formalised, logical conception of musical form.