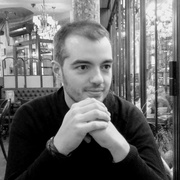 Javier Elipe Gimeno was born in Spain in 1980. He began his musical education at the age of ten at the Castellón Conservatory in Spain, studying piano. He went on to study composition and musicology in Valencia. Discovered by the composer José Manuel López López, Elipe Gimeno continued his composition studies in Paris at the Université Paris 8 in 2006, where he also studied musicology, with particular interest in mixed music and musical theater. He received his masters in musicology (with a specialization in composition) in 2007. He also became the student of Martin Matalon, whom he met during a master class, as well as studying with Michael Jarrell, Luis Naón, and Éric Daubresse at the Geneva University of Music.

In September 2008, he received a fellowship to complete a masters in composition in Tallinn, at the Estonian Academy of Music and Theater, where he studied with Toivo Tulev and Helena Tulve.

His compositions have been performed in Spain, France, Switzerland, Italy, and Estonia, at festivals including Manifeste, Archipel, Semaine du Son in Geneva, the Estonian Music Days in Tallinn, the Estonia Composers Festival, Ensems in Valencia, and the Venice Biennale.

As an instrumental composer with an interest in mixed music, Javier Elipe Gimeno has created several projects linking instrumental music and images. In 2015 he scored Clio Simon’s film Diable, Écoute, produced by Le Fresnoy in collaboration with the IRCAM. In 2014, he also received a commande d’État (commission from the French Ministry of Culture) with the Percussions de Strasbourg for a film performance with two silent films (9413: The life and death of a Hollywood Extra, by Robert Florey and Slavko Vorkapich, and Réné Clair’s Entr’acte). Both pieces premiered at the Venice Biennale in 2016. His instrumental composition for Peter Tscherkassky’s film Outer Space, originally composed for the Nikel Ensemble in Austria, was performed at the ManiFeste festival in 2019.