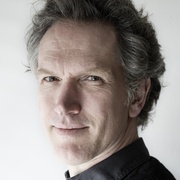 Hans Abrahamsen studied French horn and composition at the Royal Danish Academy of Music in Copenhagen and in Århus (Jutland) with Pelle Gudmundsen-Holmgreen and Per Norgård. He also trained with György Ligeti. In 1978, with other students of the Royal Academy, he co-founded the “Gruppen for Alternativ Musik” in reaction to the Acadamy’s conservative approach. With an extremely simple melody built around just three notes, his early Symphony in C (1972) was written in the spirit of the “New Simplicity” movement embraced by many Danish composers of that time.

A year later, Abrahamsen’s first string quartet, Préludes, a series of remarkable character studies, won audiences over immediately. In rapid succession, Abrahamsen composed a number of other works that added to his renown: Stratifications (1973-1975) weaves polyphony and polyrhythms together with traits from the “New Simplicity” movement to produce a striking, complex whole. Nacht und Trompeten (1981), commissioned by the Berlin Philharmonic, was written for full orchestra by request of Hans Werner Henze, who conducted the premiere.

During the 1980s, he worked closely with the London Sinfonietta, a collaboration which led Abrahamsen to devote himself largely to composing ensemble music. Winternacht (1976-1979), composed for the ISCM World Music Days in Helsinki in 1978, is one of the early fruits of his work with the Sinfonietta, which later commissioned Märchenbilder (1985) and Lied in Fall (1987-1990) from him. These works, along with Six Pieces for violin, horn, and piano (1984), were influenced by serialism. In them, Abrahamsen affirms tremendous liberty of expression within strict structures in an effort to intertwine form and freedom.

This early period of his career is characterized by new simplicity and concreteness, as well as by transparency and objectivity. Later, however, Abrahamsen would seek more immanently poetic forms of expression, inspired by the German Romantics. In the 1990s, he devoted himself mostly to other composers, transcribing works by fellow Danes such as Carl Nielsen and Per Nørgård, as well as Satie and Schumann.

Abrahamsen’s concerto for piano (1999-2000) was a kind of condensation of his creative thinking of the previous decade and marked a stylistic turn. This third period of his career is characterized by pieces such as Three Little Nocturnes, for accordion and string quartet, and Four Pieces For Orchestra, performed at BBC Proms by the BBC Scottish Symphony Orchestra in 2005. Among his more recent works, Schnee was first performed in its entirety by the ensemble recherche in Witten in 2008. A third String Quartet was also premiered that same year. Other new pieces, such as Traumlieder and Liebeslied, whose titles were inspired by the German Romantics, were premiered in 2009 and 2010, respectively. His fourth string quartet premiered at the 2012 Wittener Tage für Neue Kammermusik, performed by the Arditti Quartet. In 2013, he composed Let me tell you for soprano and orchestra, inspired by Paul Griffiths’ eponymous novel. Performed by Barbara Hannigan and the Berliner Philharmoniker, Let me tell you received multiple prizes, including the 2015 Royal Philharmonic Society Award, the 2016 Grawemeyer Award for Music Composition, and the 2016 Gramophone Classical Music Award for Contemporary Music.

Hans Abrahamsen has been teaching instrumentation at the Royal Danish Academy of Music since 1982, and composition since 1995. Since 1988, he has been the artistic director of the Esbjerg Ensemble. He is the recipient of multiple prizes, including the Anne Marie Carl-Nielsens Hæderspris (in 1989) and the Wilhelm Hansen prize (in 1998).