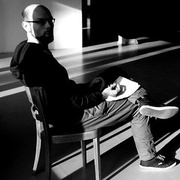 Hannes Dufek was born in Austria in 1984. He studied composition and music theory with Chaya Czernowin and Michael Obst at the the University of Music and Performing Arts Vienna, from which he graduated in 2012. In 2013, he was a composer-in-residence at Shanghai New Music Week. He then began working on a doctoral thesis under the composer Clemens Gadenstätter at the University of Music and Performing Arts Graz (KUG).

In 2006, he helped to found Ensemble Platypus, of which he remains the director. The ensemble is strongly committed to promoting contemporary music and has commissioned pieces from many emerging composers. Dufek also founded the Marathon contemporary music festival, and is currently working on a recording project titled Platypus Selected Works with the Austrian record label Col Legno, which will bring together a selection of pieces by emerging composers performed by Ensemble Platypus.

Since 2011 he has played an active role in the Austrian organization Makemake Produktionen, a group of artists working together to create interdisciplinary theatrical projects for younger audiences. It was for this that Dufek composed the musical theater piece MOMO oder die Legende vom Jetzt, which premiered at the Wien Modern festival in 2011 and won the STELLA Darstellender Kunst Prize in 2012.

His landschaft_ _interpretation won the composition prize at MusikTriennale Köln in 2010; that same year, Dufek received an Art and Culture Fellowship from the Austrian Ministry of Education. In 2012, he was awarded the Theodore Körner Funds Prize for Arresting images. Fragment of media society, a piece that premiered in collaboration with the harpsichordist Maja Mijatović, in which each performance is recorded and then played superimposed on the next performance. His string quartet Der Horizont, eine rose, das andere, which premiered at the 2014 World Music Days in Wrocław, Poland, received an honorable mention at the ISCM Young Composers Awards, organized by the International Society for Contemporary Music.