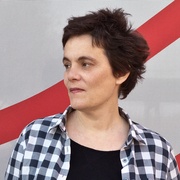 Greek composer born in Athens in 1965.

Georgia Spiropoulos studied piano, music theory and counterpoint in Athens. At the same time, she worked for around a decade as an arranger and performer of jazz and traditional Greek music.

In 1996, she moved to Paris, where she studied instrumental and electroacoustic composition with Philippe Leroux and analysis with Michaël Lévinas. In 2000, she participated in the IRCAM Cursus (IRCAM’s composition and computer music course), where she undertook further study with Jonathan Harvey, Tristan Murail, Brian Ferneyhough, Marco Stroppa, Philippe Hurel, and Ivan Fedele.

Georgia Spiropoulos’ catalogue comprises acoustic (instrumental and vocal) as well as electroacoustic and mixed music works. Her compositional style focuses on the organisation of sounds (in contrast to hierarchical pitch-based structures), and on form and temporality. She explores the notions of oral transmission and reception, and their omnipresence in musical scores and performance practice; this research has led her to pursue close working relationships with performers, which she describes as “vital interactions” for the composition of each new work. Her use of new instrumental and vocal techniques is influenced by 20th century music as well as folk traditions, experimental rock, improvised music, performance art, interdisciplinary works, and turntablism.

In 2002, she was awarded the United States Villa Medici Extra Muros Prize. She was composer-in-residence in New York in 2003-04, during which time she undertook research on interactive interfaces and gesture recognition for orchestra conductors. She was also a resident at the Cité Internationale des Arts in Paris.

In 2005, Georgia Spiropoulos was a member of the jury for admissions into the IRCAM Cursus, and in 2008, she undertook a research residency at the same institution in order to work on “Mask: The voice transformations and computer tools for live performance.”

She undertook further research on avant-garde vocal techniques at the School for Advanced Studies in the Social Sciences (EHESS) in Paris. She worked as a music and sound advisor for CharismaX – Iannis Xenakis, a documentary by Efi Xirou, produced by the Greek Film Centre, Greek Television (TV1), and Media Europe. She has lectured at Columbia University, UC Santa Barbara, IRCAM, the Munich Hochschule, SMC (Belgium), and Alte Schmiede in Vienna. In 2017-18, she taught composition and electroacoustic music at McGill University, where she held the positions of Schulich Distinguished Visiting Chair in Music and Director of the Digital Composition Studios.

In June 2015, a portrait concert, which took place at the Centre Georges Pompidou as part of ManiFeste, saw the premieres of Roll…n’Roll… n’Roll for harp and electronics, Membranes for eight timpani with transducers (2015), and Les Bacchantes for solo performer, electronics, and lights (2010).

Georgia Spiropoulos was made a Knight of the Order of Arts and Letters in France in 2013.