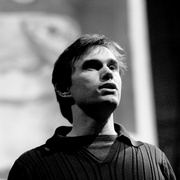 François Sarhan studied composition with Jonathan Harvey, Magnus Lindberg, Philippe Manoury, Tristan Murail, and Guy Reibel, as well as music analysis, aesthetics, cello, conducting, theory, and counterpoint. From 1999 to 2002, he attended Jacques Roubaud’s seminars on comparative poetry at the School for Advanced Studies in the Social Sciences (EHESS) in Paris.

In 1995, he was accepted at the Paris Conservatoire (CNSMDP), graduating with a degree in analysis in 1999 and in composition in 2000. He received a SACEM grant to attend seminars with Brian Ferneyhough and Marco Stroppa in Szombathely (Hungary) in 1996-1997, and participated in the IRCAM Cursus (IRCAM’s composition and computer music course) in 1997-98. From 1998 to 2002, he taught at IRCAM, and since 1999 has taught at the Marc Bloch University in Strasburg. He has also taught at the Universität der Künste Berlin since 2015, and occasionally teaches at the Hochschule für Musik Carl Maria von Weber in Dresden.

Sarhan’s catalogue is rich and varied, containing orchestral works such as DIBBUK (2010); chamber music, such as the Bobok cycle for string instruments; the opera Kyrielle du sentiment des choses, premiered at the Aix-en-Provence Festival in 2003; vocal music, such as La Philosophie dans le Boudoir, premiered in 2016 by Neue Vocalsolisten; and electronic and mixed music. His compositions are generally grouped into large-scale cycles, e.g., La Fleur Inverse, comprising some fifteen works inspired by the poetry of Jacques Roubaud, including the series made up of Esquisses, CRwTH (from the name of the collective he co-founded in 2000 with visual artist Fred Pommerehn and writer Bertrand Raynaud), and The Von d’r Wii=ge bis zum Gra=ab - “From the Cradle to the Grave”, using the spelling of Swiss artist Adolf Wölfli. Ensembles such as Ictus, Alternance, Ensemble Modern (for whom he composed Testimony in 2007), Ensemble Recherche, Ensemble Intercontemporain, and the Radio France Philharmonic Orchestra (which commissioned Five Pieces for Viola and Orchestra in 2005) have performed portrait concerts of his works.

With the CRwTH Collective, Sarhan has created animated films and video works. He regularly participates in interdisciplinary projects involving dance and theatre, and notably collaborated with South African artist William Kentridge on Telegrams from the Nose, a scenic work which received some thirty performances throughout Europe. Sarhan also authored an “Encyclopaedia“, combining articles and illustrations on a range of subjects, which gave rise to a series of performances and conferences.

He is regularly invited as a composer-in-residence at Autumn in Normandy, Metz Arsenal, Witten Festival, and Orleans Theatre (2009 to 2012). These institutions collectively produced King Lear, a chamber opera with an original libretto by Jacques Roubaud, premiered in Le Havre in November 2010. In 2014, a residency at Muse en Circuit gave rise to the composition of Wandering Rocks. In the same year, he was also in residence at the Château de Chambord, where he devised La vérité sur le château de Chamboord, an exhibition comprising several installations, collages, texts, and an audio guide which provided a humorous pastiche of an imagined history of the site.

In 2016, the Alamuse label released the album Wandering Rocks/Commodity Music, featuring an immersive work which was originally premiered at the Palais de Tokyo by the Zwerm Quartet.