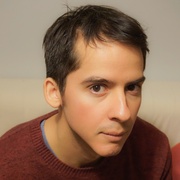 Francisco Alvarado was born in 1984 in Santiago, Chile. In 2008, he was selected for the “Young Composer Session” of the Symphonic Orchestra of Chili and in 2009 won the CDMC prize at the composition session of the INJUVE Awards in Madrid. In 2013, he represented Chile at the World Music Days in Slovakia with Tricycle. In 2016, he worked with Philippe Manoury and Alberto Posadashe at the Musica Festival Composition Academy in Strasbourg, of which he was named the winner. In 2017, he was the Camargo Foundation Core Program Resident in Cassis, France. In 2019-2020, he completed a residency at the SWR Expermientalstudio and at GMEM Marseille.

In 2013, Alvarado received a Commande d’état (a commission from the French Ministry of Culture) for Convergences, which premiered at the Abbaye de Royaumont. He composed the final act of the opera Maudits les Innocents, which was performed at the Opéra Bastille in 2014; another composition, Karukinka, was included in the program of the Festival Musica in 2015. Corps et ombre ensemble s’engloutissent for double bass and ensemble premiered at the Opéra National du Rhin de Strasbourg in 2018, performed by Ensemble Linea.

His current work focuses on the interaction between music, performance space, and electronics in the context of multimedia projects.

Francisco Alvarado has received grants and scholarships from the Fondation de France, the Fonds de Tarrazi, the Culture and Arts Council of the Chilean Government, Santander Bank, and the Fondation Marcel Bleustein-Blanchet pour la Vocation.