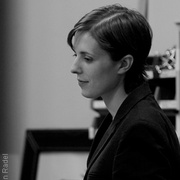 During a research residency at IRCAM in 2011-2012, she was commissioned to compose Unfolding for string quartet and electronics. The piece was premiered by the Arditti Quartet at the Lyon Musiques en Scene Biennale in March 2012, and subsequently performed at the ManiFeste Festival the same year.