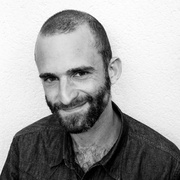 Florent Caron Darras was born in 1986 in Japan. He began studying musical practice through Gregorian chant as a member of the choir of the École Maîtrisienne des Pays de la Loire, and studied classical percussion at the Conservatoire d’Angers. He earned a masters degree in contemporary musical research at the University of Paris IV-Sorbonne. He studied composition with Jean-Luc Hervé and Yan Maresz before enrolling at the Conservatoire de Paris (CNSMDP), where he took classes with Stefano Gervasoni and Luis Naón. He received four Prix in the course of his conservatory studies in composition, improvisation, analysis, and aesthetics (working on the relationships and interactions between music and soundscapes). Tristan Murail, Toshio Hosokawa, Bryan Ferneyhough, Mark Andre, Yann Robin, Raphaël Cendo, and Fabien Lévy were all important influences, conversing with and advising Caron Darras during this period. Soon after, he participated in Cursus (the IRCAM’s composition and computer music course). With an agrégation degree in music, Caron Darras now teaches acoustics, analysis, and music history at the Université Catholique de l’Ouest while continuing his research into Georgian polyphony with Simha Arom. In 2019, he enters the Ph.D program SACRe of Université PSL, within the École Normale Supérieure doctoral school and under the direction of Makis Solomos and Gérard Pesson.

He has worked with numerous ensembles, including the Ensemble intercontemporain and the Multilatérale, Regards, and Muromachi (Tokyo) Ensembles, as well as the Castalian Quartet (London). Additionally, he has worked with performers such as Marie Ythier, Annabelle Jarre, Fanny Vicens, and Nicolas Arsenijevic, as well as conductors Matthias Pintscher, David Reiland, Léo Warynski, and Simon Proust. His music has been broadcast by France Musique and on the GRM’s acousmonium, and performed at the Philharmonie de Paris, the Tokyo Bunka Kaikan, Studio 104 at the Maison de la Radio, and the Centquatre-Paris, as well as festivals including ManiFeste, Présences, Mixtur (Barcelona), and the Milan World Expo. He has received fellowships from the Fondation de France (Prix Monique Rollin), the Fondation Meyer, and the SACEM.

Florent Caron Darras is equally drawn to spectral music, electronic music, and traditional music (particularly that of Iran and Japan), and writes music that “questions sonic models, territories, ornaments and attacks, inspired even in his titles by the relationships between humans, environment and technology.”