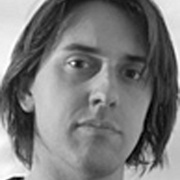 Composer and jazz pianist born in Turin in 1983.

Fabrizio Rat Ferrero is a composer of contemporary music and a jazz pianist. His dual professional activities are in constant dialogue with each other, largely through his research into points of commonality between the two, be it in terms of ideas, temporal processes or compositional structures. Following studies of composition with Gilberto Bosco and George Benjamin, he undertook further study with Frédéric Durieux (composition) and Riccardo Del Fra (jazz) at the Paris Conservatoire (CNSMDP).

In the Summer of 2007, he was in residence at the Tanglewood Center, and in 2008, participated in Royaumont Voix nouvelles, where he took composition lessons with Brian Ferneyhough.

His works have been performed by ensembles such as Ensemble Modern, the Orchestra of Graduates of the Paris Conservatoire, Lontano, the Altair Wind Quintet, RAI Symphony Orchestra, TMC fellows, and Ensemble Antidogma, and in festivals including MITO Settembre Musica and Rai Nuova Musica/T3 Triennale Tremusei (both in Turin), Musica, and Gaudeamus. He has also appeared as a performer at numerous festivals in Italy, France and England, both as a soloist and as a member of various ensembles.

In the Autumn of 2009, as part of a trio with Ronan Courty and Fabricio Nicolas, Rat Ferrero recorded the CD Bass walk with me, financed by the Meyer Foundation for the Paris Conservatoire “Young Soloists” Series. In the same year, he presented A couple of times, an improvised music and “pictorial” performance, in collaboration with visual artist Myriam El Haïk.