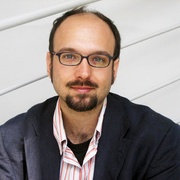 Eric Maestri studied composition in Brescia, Turin and Strasbourg with Gilberto Bosco, Ivan Fedele, and Yan Maresz. He also undertook studies of philosophy and musicology. In 2004, he was awarded the Aberdeen Music Prize for his string quartet Sul ponte sul mare. He was a finalist in Gaudeamus Music Week in 2008, and attended Centre Acanthes in 2007 and 2008. In 2009-10, he participated in the IRCAM Cursus (IRCAM’s composition and computer music course), during which he composed Ritratto vivente. In 2009, he received the SACEM Prize, and in 2010, was invited to attend the Darmstadt Summer courses, where his work Y. K. was premiered.

His works have been performed at ISCM-Meridien (2008), Akiyoshidai Summer in Japan (Ess…; 2009), Berlin Konzerthaus, Brandenburger Theater, and Gaudeamus Music Week, by groups including Imaginaire, musiques d’idées, of which he is founder and artistic director, as well as Berlin PianoPercussion (Endeared; 2010), Insomnio (Tracce della luna; 2008), Arsenale (Aus tiefer Noth; 2009), Xenia (Pieghe; 2007), Lorraine National Orchestra and the Strasbourg Chamber Choir (Tre pitture; 2007-08). His music has also been broadcast on Radio Rai, Radio France, and NPO (the Netherlands).

In 2010-11, he composed Celestografia for the Prometeo Quartet and Valentina Coladonato, commissioned by the Spinola-Banna per l’Arte Foundation, as well as Celestografia, …musica musicans (a more developed version of the work he composed during his second year in the IRCAM Cursus), premiered by Elisabeth Calleo and MusikFabrik at Agora Festival in June 2011.

After having taught at Strasbourg University and Conservatory, he is now a professor at Paris VIII University, where he is also a member of the CICM Laboratory.

His scores have been published by Suvini Zerboni since 2011. In 2016, a recording of his work Le Cose (2012), performed by Instant Donné, was released on the Stradivarius label.

Eric Maestri is co-founder of de/nu/thing, a composers’ collective which runs the blog www.nuthing.eu, and whose members have collaborated with each other on the composition of a number of works.