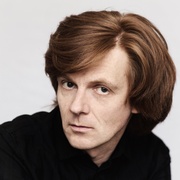 Enno Poppe studied conducting and composition at the Berlin Universität der Künste, notably with Friedrich Goldmann and Gösta Neuwirth. He went on to pursue studies of sound synthesis and algorithmic composition at the Berlin Institute of Technology and at ZKM in Karlsruhe with Heinrich Taube. He has been awarded numerous grants (e.g., from the Berlin Senate for composition in 1992, 1995 and 1998, and from the Märkische Kulturkonferenz in 1994) and prizes (e.g., Boris-Blacher Prize for Gelöschte Lieder in 1998, City of Stuttgart Prize for Knochen in 2001, from the Ernst-von-Siemens Foundation in 2001 [conjointly with Ensemble Mosaik] and 2004, and from the Berlin Academy of the Arts in 2002 and 2006). In 1996, he took part in the GNM Youth Forum and was in residence at the Cité Internationale des Arts in Paris. In 1999, he was a guest at the Boswil International Composers’ Seminar (Switzerland). From 2002 to 2004, he taught composition at the Hochschule für Musik Hanns Eisler in Berlin, and in 2004, at the Darmstadt Summer Courses.

As a conductor, Enno Poppe regularly works with Klangforum Wien, MusikFabrik and Ensemble Resonanz. He has been the Musical Director of Ensemble Mosaïk since 1998.

As a composer, he has received commissions from festivals such as Witten, Berlin, Donaueschingen, Salzburg, Éclat, Musica Viva and the Munich Biennale, and from ensembles including Ensemble Modern, Klangforum Wien, Mosaïk, Contrechamps, MusikFabrik and Resonanz, working with conductors such as Stefan Asbury, Pierre Boulez, Martyn Brabbins, Emilio Pomárico, Kasper de Roo, Peter Rundel and Ed Spanjaard.