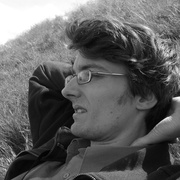 Einar Torfi Einarsson was born in Iceland in 1980. He studied guitar and composition at the Reykjavik College of Music. In 2005, he enrolled in the Conservatorium van Amsterdam, where he studied with Fabio Nieder, Richard Ayres and Willem Jeths. He then went to the University of Music and Dramatic Arts Graz, where he studied with Beat Furrer.

In 2008, he was a composer in residence at the Ligeti Academy in Amsterdam, organized by the Asko Ensemble and the Schönberg Ensemble. There, he participated in masterclasses with Salvatore Sciarrino, Brian Ferneyhough, Emmanuel Nunes, and Jonathan Harvey. He completed his doctorate under Aaron Cassidy at the CeReNeM (Centre for Research in New Music) at the University of Huddersfield, where he also taught composition.

Einar Torfi Einarsson’s compositions are characterized by extreme dynamic and structural contrasts and explore the “tactile” effects of sound. They have been performed in The Netherlands, France, Austria, and Germany, by ensembles such as Klangforum Wien, the Ensemble intercontemporain, Elision, the Nieuw Ensemble, Asko, the Insomnio Ensemble, Ensemble Adapter, the Holland Symfonia and the Caput Ensemble.

Einarsson has won multiple grants and fellowships, including from Iceland’s Musica Nova Foundation, the Composers Fund 365, and the City of Reykjavik for his work with performers. His piece Nine Tensions received the Henriëtte Bosmans Prize at the Music Days Festival of The Netherlands in 2008. He was a finalist for the Buma Toonzetters Prize in 2009 for best ensemble piece. Apertures for orchestra was selected by the Holland Sympfonia Young Composers Project and premiered at the Gaudeamus Music Week in 2009.

Notable pieces include two compositions premiered by the Elision ensemble – Tendencies, at the Huddersfield Contemporary Music Festival in 2009, and Non-vanishing vacuum state at the Transit festival in 2011. In 2011, the Nordic Music Days festival commissioned Repetition of Repetition for the Iceland Symphony Orchestra. He is one of the five winners of the 2009 Impuls Composition Competition, where his Quanta premiered in a performance by Klangforum Wien in 2011. Desiring-Machines, a commission from the IRCAM and the Ensemble Intercontemporain, premiered in October 2012.