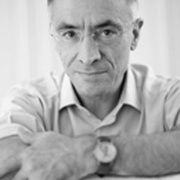 Jean-Marc Singier interrupted his studies of literature in favor of music, starting with theory and counterpoint with Solange Chiapparrin, then studied guitar and took classes in African drumming at the Dakar Institute of Art, in addition to studies of Iranian percussion at the UER of Ethnomusicology in Paris. He went on to study composition in Bucharest and Vienna, where, in 1979-80, he attended classes with Aurèle Stroë and Györgi Ligeti, and then in Sienna and Rome with Francesco Donatoni, graduating from the Accademia Santa Cecilia with highest honours in composition in 1983.

In 1985, he was awarded a grant for his piece Blocs en vrac de bric et de broc (1993) from the Maurice Ravel Foundation, and from 1986 to 1988 was a resident at the Villa Medici. He attended courses at IRCAM in 1992. For two years he taught composition at Royaumont Voix Nouvelles, and was awarded the SACEM Composers’ Prize in 2004.

Having become certified to teach music [ with a Certificat d’Aptitude de Culture Musicale] in 1998, Jean-Marc Singier is now a theory and orchestration professor at the Auxerre Conservatory.

Perhaps owing to his training as a percussionist, Singier’s music prioritises rhythm. In this regard, he has a passion for the sonic structures of the Notre Dame School polyphonists. This fascination with rhythm extends to the alliterative titles of works such as Traces, et strettes, en strates… en strophes (1989), S’immiscent, en phases, en lice, en files, pêle-mêle (1994), Drus, flous, débridés, des bouts s’ébrouent (1996), and D’instinct distant d’instants distincts du flux: solo? (2007). He is also inspired by French literature, be it Rabelais or the surrealist writing of Alfred Jarry and Raymond Queneau, as well as painting, notably the works of Arcimboldo, Bosch, Kandinsky, and Picasso.

Singier’s works are published by Lemoine Editions. A portrait CD of his works was produced in 1995 by Accord.