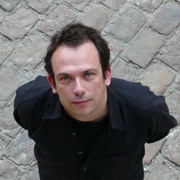 Born in 1969 in Dijon, Frédéric Pattar initially studied piano, accompaniment, music theory, and electroacoustic composition. Starting in 1994, he undertook study of composition with Gilbert Amy at the Lyon Conservatory (CNSM), graduating four years later. He completed his studies at IRCAM, where he participated in the Cursus (IRCAM’s composition and computer music course) in 1999.

Pattar has received commissions from the Festival d’Automne in Paris, the Louvre, Alliance Française in Hannover, Lyon Conservatory, and the André Boucourechliev Foundation (2005). His works have been performed in France and abroad by ensembles such as Ensemble Intercontemporain, Ensemble Orchestral Contemporain, Les Temps Modernes, Accroche Note, Ensemble Cairn, and the Manfred Quartet. Over the past few years, he has worked closely with Ensemble L’Instant Donné, for whom he has composed several new works. He also regularly appears on radio programmes on France Musique and France Culture.

Frédéric Pattar is particularly interested in interactions between music, text, and visual representations. His compositions reveal a pluralistic musical language which is characterised by constant tension, but also by a certain lyricism which conceals a palpable dramatic intensity. Rhythmic fluxes, the driving elements in his works, appear in successive waves, each revealing a harmonic structure, giving rise to intuitive, but also unexpected, listening experiences.