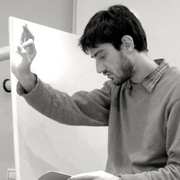 Mathieu Bonilla studied at the Conservatoire National de Région de Rennes and at Rennes 2 University, where he obtained a master’s degree in musicology and a state diploma in classical guitar. He studied with Alain Bioteau and Yves Krier while collaborating as a composer and performer with the ensembles Chrysalide, Rhizome, and Choréa. He continued his training in the Cursus program for composition and computer music at IRCAM and at the Paris Conservatory in Gérard Pesson’s composition studio.

Bonilla won the Pierre Cardin Prize of the Académie des beaux-arts and a prize from the Fondation Salabert. He was artist-in-residence at the Casa de Velázquez for the Académie de France in Madrid in 2013-2014.

He has been programmed by the Fondation Cartier and collaborated with Jean-Yves Jouannais, the composer Sébastien Roux, the visual artist Edouard Decam, the Atelier Permanent de Recherche Théâtrale, the Petit Festival, and Ode & Lyre. His pieces have been performed by ensembles including Garage, Maja, Ex Novo, L’Instant Donné, Cairn, the Ensemble Orchestral Contemporain, Spat’Sonore, the Quatuor Diotima, the Orchestre de Massy, and the Orchestre National de France.

Bonilla is both a creator and a pedagogue. He writes for a broad array of instruments, and guitar especially. He has been teaching guitar since 2012 at the Conservatoire de Musique André Navarra in Charenton-le-Pont. He has a broad interest in transmission, from non-readers and young ages to experienced musicians. With the Guitare Fusion ensemble at the Maison des Pratiques Artistiques Amateurs, he developed an artistic project, Nylon curvado (2014), for 34 guitars.

In his compositions, Bonilla is on the lookout for moments of “resonance,” as the philosopher Hartmut Rosa might define them, meaning moments that arise from a fertile relationship to the world, which allow each person to be touched and transformed, and which galvanize their will to act.1 These resonances link expanded modes of play, microtonality, and musical expression. Bonilla’s musical syncretism reaches back through a long European lineage: from Jean-Philippe Rameau, Franz Schubert, Gabriel Fauré, and Claudio Monteverdi to Benjamin Britten, Thomas Adès, Luigi Nono, Pesson, Michaël Levinas, Hugues Dufourt, and Helmut Lachenmann. His music is in “resonance” with Western composition as seen as an adventure in opening up sound.