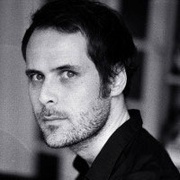 Pierre-Yves Macé studied piano and percussion at the Rennes Conservatory while also teaching himself the rudiments of composition. Upon completing a Master’s degree in modern literature, he obtained a Doctorate in musicology in 2009 from Paris VIII University. His doctoral thesis — exploring historical musical recordings from the advent of the first recording devices to modern times — was published by Les Presses du Réel under the title Musique et document sonore. In 2014, he was awarded an Institut Français Extra Muros residency for his Contreflux project, and in 2016-17, was composer-in-residence with the Paris Chamber Orchestra. He is a composer accompanied by the Théâtre Garonne in Toulouse, for the 2022-2023 and 2023-2024 seasons.

Macé’s research on sound archives informs his work as a composer, with recorded sound and archival material featuring prominently in his music through processes of musical recycling and quotation. This approach, at the crossroads between electroacoustic music and sound art, is especially salient in works such as Song Recycle (2010), a cycle of pieces for piano and monophonic fixed media, composed using recordings taken from YouTube videos in which people are singing a favourite “hit” song (e.g., by Christina Aguilera, Schubert, Fauré, etc.); the recordings were subsequently edited and merged with one another in a musical “cut up” process. Their presence in the electronics, and the accompaniment of the piano, represent a sort of inverted form of karaoke.

Macé’s works have been performed by ensembles such as Ensemble Intercontemporain (conducted by Matthias Pintscher and Enno Poppe), Cairn, Instant Donné, Paris Chamber Orchestra, Hong Kong Sinfonietta, Les Cris de Paris, Amôn Quartet, the Ensemble of European Improvisors (EIE), and the 0 Collective, and at festivals including the Paris Festival d’Automne (during which a portrait concert of his works took place at the Théâtre des Bouffes du Nord in 2012), Villette Sonique, Présences Électronique, Ars Musica, and Akousma, among others. As a performer, he has appeared alongside artists such as Matmos, Richard Chartier, Andrew Bird, and Lee Ranaldo.

In 2002, his first CD, Faux-Jumeaux, was released on John Zorn’s label Tzadik. The same label released Segments et Apostilles in 2013. His works have also been released on the Sub Rosa, Orkhêstra, and Brocoli labels.