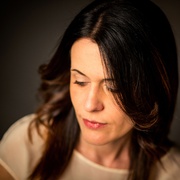 Daniela Terranova studied composition in Udine, Italy, with Azio Corghi and Ivan Fedele, and wrote a thesis titled “Myth and Music in Contemporary Musical Production for Theatre” during her studies at the University of Udine, jointly with Paris III Sorbonne Nouvelle. She went on to do a post-doctorate under the direction of Beat Furrer at the Universität für Musik und darstellende Kunst in Graz, and undertook further study with Toshio Hosokawa at the “Son[ut]opìas” master-class in Santiago de Compostela, and with Javier Torres Maldonado in Seville. She has taught composition since 2017 at the Conservatorio Agostino Steffani in Castelfranco Veneto, Italy.

For four years, Daniela Terranova was composer-in-residence at the Vallée d’Itria Festival, where her opera, L’Orfeo was premiered to great acclaim in 2012. For the 40th edition of the festival in 2015, as part of the “Emerging Classical Talent in the EU” Cultural Project, she was commissioned to compose Asleep landscape, a setting of texts by Shakespeare for soprano, alto saxophone, and string orchestra; the piece was premiered in Estonia and subsequently performed in Cardiff, Stockholm, and Kalmar.

Her works have been performed in festivals and concert series in Italy and abroad, including the Traiettorie Festival, Play it!, the Festival della Valle d’Itria, ContempoArte in Florence, Budapest Music Centre, Time of Music, Tallin Chambre Music Festival, Royal Welsh College of Music and Drama in Cardiff, and the Styria Cantat VI Festival in Graz.

Her later works show a preoccupation with the material nature of sound, which is closely connected to the materials used in the construction of the instruments themselves. She attempts to create “living still lifes, in which the primordial aspect of the material, liberated from any external subject, is the basis for the expressivity of the form. The intention is to create inflatable structures, lively sonic organisms whose breathing and sighs can be heard and seen in textures which are eternally oscillating between evanescent colours and concrete matter. Her gestural and chromatic language seeks to liberate itself from the weight of material substance and to incite the listener to contemplate the complexity of life; a new artistic attempt to halt the corruption of matter.”