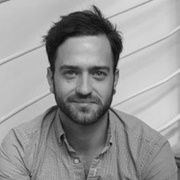 Frédéric Le Bel was born in Canada in 1985. He studied jazz at CIM (Centre d’Informations Musicales) in Paris in 2004 before devoting himself exclusively to composition starting in 2007, when he entered the University of Montreal, studying with Philippe Leroux. He earned his bachelors degree in composition in 2011, then enrolled in the Conservatory of Music in Montreal, where he studied with Serge Provost, graduating with a masters in composition in 2013 and an artist diploma in 2014. He then completed two years of study in Cursus (IRCAM’s composition and computer music course) with Hèctor Parra, Jean Lochard, and Mikhail Malt (2014-2016). He is currently completing a doctorate with IRCAM and the Université Paris 8 on the development and integration of computer learning techniques in the creative process, under the direction of Mikhail Malt and Alain Bonardi.

Le Bel has taken part in several international academies, including Impuls Academy in Graz, Austria; IRCAM’s Académie ManiFeste in Paris, France; the Young Composer Meeting in Apeldoorn, the Netherlands; and the International Young Composers Forum of the Nouvel Ensemble Moderne in Montreal, Canada.

His compositions include instrumental and acousmatic music, as well as mixed music, and have been performed by artists and ensembles such as Brice Martin, Cameron Crozman, Ricardo Descalzo, the Quasar saxophone quartet, the Cecilia String Quartet, the Dr. K Sextet, the Curious Chamber Players, the Divertimento ensemble, the Barcelona Modern Project, the Nouvel Ensemble Moderne, Klangforum Wien, the Orkest de Ereprijs, and the CMM Youth Orchestra. His work has featured at festivals such as Montréal Nouvelles Musiques (Canada), the Cheltenham Music Festival (United Kingdom), the Time of Music Festival (Finland), Gaudeamus Muziekweek (the Netherlands), Mise-en Music (USA), and Expo Milano (Italy).

He sees composition as a “strange mix of research, discovery, and confused, unsettling sensations,” and considers “expression by sound phenomenon through an architecture bearing knowledge and meaning” to be a central preoccupation in his artistic approach.