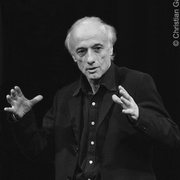 James Giroudon was born in La Tour du Pin in Isère, France. He holds degrees in art history, sociology, and education sciences from the University of Lyon as well as graduating with a degree from the Conservatoire de Paris (CNSMDP), where he studied with Pierre Schaeffer and Guy Reibel.

Giroudon taught at the École nationale de musique de Saint-Étienne from 1982 to 1990, and founded the electroacoustics course there. He became a lecturer at the Université de Caen in 1992 (performing arts degree program). In 1981, he founded the GRAME in Lyon with Pierre-Alain Jaffrennou, and has served as its co-director ever since.

In 1992, Giroudon and Jaffrennou founded the festival Musiques en Scène in Lyon, which became a biennale in 2002. Since 1998, he and Thierry Raspail have co-curated the Musiques en Scène sound art show at the Lyon Museum of Contemporary Art. He was also invited to curate the 2000 Belluard Festival in Fribourg, Switzerland. Since September 2001, he has headed the “contemporary music” section of the Bloc Notes de la Mapra journal, published by the Maison des Arts Plastiques Rhône-Alpes.

His works are regularly performed outside France, on tour with Grame concerts and by invitation from festivals in Europe, China, and North America. He was awarded the 1989 Académie du Disque Français prize for the group album Grame-Musiques numériques and a Bronze Faust in 1993 for the opera Jumelles, co-written with Pierre-Alain Jaffrennou. Several of his compositions have been recorded and released on labels such as Forlane (MFA series), ECM, Instant Présent, and Nova Musica.

James Giroudon has continued collaborating on multimedia projects that mix instrumental material and electronic sounds and devices, co-writing with the composer Jean-François Estager. In 2009, he received a commission from Forum-Musique and the Taipei Chinese Orchestra.