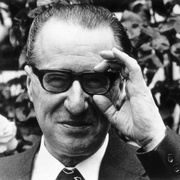 Jean Françaix was born in Mans, France in 1912. His father was the director of the city’s conservatory and his mother was a singing teacher. Françaix studied piano under Nadia Boulanger starting at the age of ten, and at eighteen, he graduated with highest honors in piano from the Conservatoire national supérieur de Paris.

He composed numerous pieces for ballet, five operas, several vocal works, and oratorios, including the L’Apocalypse selon Saint Jean, which premiered in Paris in 1942 in a performance by Charles Munch, and was performed in Berlin, London, Italy, and France. He also wrote film scores and a significant corpus of chamber music.