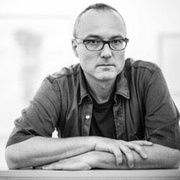 Clemens Gadenstätter was born in Austria in 1966. He studied composition with Erich Urbanner and Helmut Lachenmann, while also learning the flute at the University of Music and Performing Arts in Vienna. From 1989 to 1992, he was the flutist for the Klangforum Wien. With Florian Ernst Müller, he co-founded the neue musik—wien ensemble in 1990. In 2001, he co-founded the Vienna arts organization “werkschaft” with Ilse Kilic, Lisa Spalt, and Fritz Widhalm.

Gadenstätter’s music explores the compositional synthesis of perception, feeling, and emotion. His recent work has focused on acoustically triggering the transformation of pre-formed feelings, as in the series E.P.O.S. —*Les premiers cris* (2016), Les cris des lumières (2014), Les derniers cris (2015). He has also explored this idea in an article titled “Hören Verstehen Komponieren“ (“Hearing, Understanding, Composing”) which appeared in MusikTexte in 2014. Gadenstätter is also interested in daily work and the concept of the banal, which he explores in Semantical Investigations I (2006) for violin and ensemble, Semantical Investigations II (2007) for small ensemble, and in his essay “Was heißt hier banal?“ (“What does banal mean here?”) He also works on the poly-modality of listening through the trinity of listening, comprehension, and composition in his series Paramyth (2012-2017), his three string quartets, the minimalist opera ES (2011) for voice, ensemble, and film, and the E.P.O.S. series. He also explores “musical iconography,” notably in his series Iconosonics (1-3).

Recently, Gadenstätter expanded his musical research to include new media; for example, Les cris des lumières was written for ensemble and lights, while Daily Transformations (2017) was composed for voice, instruments, electronics, video, space, and light, in collaboration with Anna Henckel-Donnersmark for the film element and Lisa Spalt for the text.

Since 2003-2004, he has taught music theory, analysis, and composition at the University of Music Graz. In 2013, he was a guest professor at the University of Music and performing arts Carl-Maria von Weber in Dresden, and in 2017-2018, he was a guest professor for composition at the Nordic Music High School in Oslo. In 2014, Clemens Gadenstätter taught at the Darmstadt Ferienkurse für Neue Musik; in 2013 and 2015, he taught at the Impuls Academy in Graz.

From 1995 to 2000, Gadenstätter edited ton, the music journal of the Austrian section of the International Society for Contemporary Music (ISCM). Until 2002, he organized many events including SALON13, which was six evenings of music, literature, cinema, art, and science at the Vienna Echoraum.

His music was published by Ariadne Verlag from 1990 to 2005 and since then has been published by Rai Trade and Rai.com.