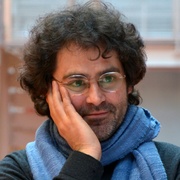 Carmine-Emanuele Cella was born in Italy in 1976. A composer and researcher, he works on the relationship between mathematics and music. He holds degrees from the Conservatorio G. Rossini di Pesaro in piano, computer music, and composition, as well as a masters in composition from the Accademia Nazionale di Santa Cecilia in Rome, where he studied under Azio Corghi. Additionally, he studied philosophy and mathematics, and earned a doctorate in mathematical logic from the University of Bologna with a doctoral dissertation titled On Symbolic Representations of Music (2011).

In 2007-2008, Cella traveled to Paris to work as a researcher in the IRCAM’s Analysis/Synthesis team, studying audio indexing. In 2011-2012, at IRCAM, he designed the live electronics for the opera Limbus-Limbo, by Stefano Gervasoni. That same year he was a composer-in-residence at the IRCAM, and during that time his piece Gia’ s’ottenebra il giorno premiered at the ManiFeste 2012 Festival-Academy, which also commissioned Reflets de l’ombre for the Orchestre de Radio France, which premiered in June 2013 at the Salle Pleyel. In 2013-2014 he was selected to be a resident at the Casa de Velazquez in Madrid. In 2015-2016, he conducted research in applied mathematics for a post-doctorate directed by Stéphane Mallat at the École Normale Supérieure de Paris. In 2016, he held a residency at the American Academy in Rome. Since January 2019, he has been an assistant professor of music and technology at the University of California, Berkeley.

Currently, the two areas of research on which Carmine-Emanuele Cella is working are the application of artificial intelligence to music creation (notably through the development of Orchid, an assisted orchestration software) and instrument augmentation.