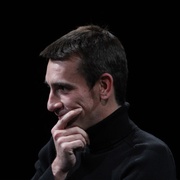 Since his graduation from the CNSMDP in 1999, he has devoted himself to creating music in the broadest sense of that term, including instrumental, vocal, and electroacoustic compositions; improvisation and performance; musical theatre; opera; and designing installations and technologies.

In parallel, his proximity to the contemporary theater world has also led Dupé to explore how music is performed and to invent distinctive new forms for the traditional concert. In this spirit, in 2000, he and composers Benjamin De La Fuente and Samuel Sighicelli co-founded Sphota, a cooperative for musical invention, with whom he premiered seven shows. Featured at contemporary music festivals such as Musica Strasbourg and März Musik Berlin, in theaters including MC2 in Grenoble and Le Parvis in Tarbes, and in concert halls such as the Auditorium du Louvre and the National Music Auditorium of Madrid, Sphota held a residency at Bonlieu (Annecy’s national theater) from 2004 to 2006 and released an album in 2010 titled Zemlia (La Terre) with the label Radio France Signature.

He also works in the world of theater and stage performance with directors such as Declan Donnellan (for Le Cid at the Festival d’Avignon in 1998), Renaud-Marie Leblanc (for Erich Von Stroheim by Christophe Pellet at the Merlan national theater in Marseille in 2010), as well as with choreographers. With Thierry Thieû Niang, he premiered A bout de souffle with a group of senior citizens in 2007 (Marseille, Friche la Belle de mai), and then Au bois dormant, which explores the world of autism, a collaboration that included Marie Desplechin and Patrice Chéreau (Festival de Marseille, 2008).

In 2009, he created Comme je l’entends, a solo work that explores the question of how audiences perceive contemporary music. Weaving together his own musical compositions and recordings of “lay” audience members’ reactions to his music, this “autobiostage” performance, which premiered at the Théâtre des Salins (national theater of Martigues), has toured extensively in contemporary music festivals and national theaters.

In 2010, he composed a radio version of Comme je l’entends for seven instruments, recorded by musicians including Pascal Contet and Bruno Chevillon. Broadcast on France Musique and France Culture, the piece was awarded the Prix Italia in Turin (an international radio prize).

In 2012, Fantôme, un léger roulement, et sur la peau tendue qu’est notre tympan premiered at the Les Musiques à Marseille festival in a performance by an ensemble of mechanical instruments and remotely controlled sound objects. To experience the work, which is freely inspired by the myth of Orpheus, fifty audience members are seated in a luminous, musical space that creates a completely immersive sensory experience of a wondrous, ghostlike world. The work has toured extensively in national theaters, has been featured at the festival of Aix-en-Provence, and has been performed in the Théâtre Liberté in Toulon and the Théâtre de Caen.

In 2014, he composed a work in two phases titled Il se trouve que les oreilles n’ont pas de paupières and based on Pascal Quignard’s book La Haine de la musique. Its Prelude was performed with actor Pierre Baux and violist Garth Knox at the Festival d’Avignon as part of the Sujets à vif program, and the final version of the project, with the same actor, the Tana string quartet, and electronics created by the IRCAM, was performed the following autumn at the Phénix in Valenciennes before going on tour; it also featured at ManiFeste in 2015.

In 2017, Dupé composed an opera, Du chœur à l’ouvrage, for child vocalists (choir and solo voices) and ten-instrument ensemble, for which he commissioned a libretto from Marie Desplechin. It premiered at the Théâtre de Caen and was performed again by the Maîtrise de Radio France – Bondy at the Nouveau Théâtre de Montreuil and the Maîtrise des Bouches-du-Rhône.