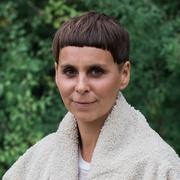 Ashley Fure was born in the United States in 1982. She composes acoustic and electroacoustic works that are played across Europe and the United States. She holds degrees in composition from the Interlochen Arts Academy and Harvard University, where she earned her doctorate in 2013 under the direction of Chaya Czernowin.

During her time in Cursus 2 (IRCAM’s composition and computer music course) in 2010-2011, Fure developed a large-scale multimedia installation titled TripWire in collaboration with the artist Jean-Michel Albert, which premiered at the Fresnoy-Studio National as part of the Panorama show. Another installation, Veer, created in collaboration with architects Ellie Abrons and Adam Fure, was the culmination of a ten-month residency at the Akademie Schloss Solitude in Germany in 2012.

Among her instrumental compositions, Cyan for orchestra (2009) was a commission by the Marquette Symphony Orchestra, with support from the National Endowment for the Arts. Aperture/Iris, for ensemble, a commission by Boston’s Calithumpian Consort, premiered in 2010. Wire & Wool for solo cello and live electronics was the final project for her Cursus 1 course at the IRCAM in 2008-2009. Soma for ensemble (2012) was a commission by Staubach Honorarium.

She has twice been a guest of IRCAM’s Festival ManiFeste: in 2014, she collaborated with choreographer Yuval Pick for an electroacoustic piece titled Ply and in 2017, she worked with the Diotima Quartet for her augmented string quartet Anima.

Her music has been broadcast by National Public Radio (United States), Deutschlandfunk Cologne (Germany), Radio Monalisa (the Netherlands), and performed at festivals such as the ISCM World Music Days in Lithuania, the Siren Festival in Göteborg (Sweden), the Third Practice Electroacoustic Music Festival (United States), and the Impuls Festival in Graz (Austria).

Fure was awarded the Julius F. Jezek prize in 2011, which came with a commission for the Talea Ensemble of New York (Therefore I was, which premiered in 2012) and the Adalbert W. Sprague Prize in 2010. She has also been nominated twice for the ISCM World Music Days, and is the winner of a George Arthur Knight Prize, a SCI/ASCAP Young Composers Prize, a IAWM Pauline Oliveros Prize, a Blodgett Composition Prize, and the Oberlin Conservatory Grand Prize in Composition in 2004. In 2013-2014, she was awarded a Fulbright fellowship to France. In 2014, she was awarded the Darmstadt Kranichsteiner Musikpreis. In 2015, she won the Busoni Preis of the Akademie der Künste in Berlin and in 2016, the Grant for Artists from the Foundation for Contemporary Arts in New York.

In 2012, Fure taught composition at the Oberlin conservatory and since 2015 has taught music at Dartmouth College.