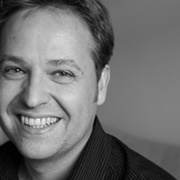 Arnulf Herrmann was born in Germany in 1968. He studied piano with Arkadi Zenzipér in Dresden and with Gernot Sieber at the Richard Strauss Conservatory in Munich before going on to study composition and musicology with Wilfried Krätzschmar and Jorg Herchet in Dresden. He attended the Conservatoire de Paris (CNSMDP), where he studied with Gérard Grisey and Emmanuel Nunes, then returned to Germany, where he studied composition with Friedrich Goldmann and music theory with Gösta Neuwirth, Hartmut Fladt, and Jörg Mainka in Berlin. In 1999, he participated in Cursus (IRCAM’s composition and computer music course) and was awarded a DAAD artist fellowship. In 2000-2002, he studied composition with Hanspeter Kyburz at the Hanns Eisler Academy of Music in Berlin.

His compositions have been performed by major international ensembles including Ensemble Modern, Klangforum Wien, and the Ensemble Intercontemporain at festivals around the world.