The original inspiration for this composition comes from a specific scene in the play Le Soulier de Satin written in 1924 by Paul Claudel. This is a work that Pierre Boulez came in contact with on the occasion of Jean-Louis Barrault’s production at the Comédie Française. The action in Le Soulier de Satin takes place mostly in Spain but also many other places (Mogador, Americas etc.). There are many references to distant places and times, but few to “here and now”. The work is a sort of “zig-zag” of place and time.

The title of Boulez’s work comes from a particular point in Claudel’s play : the second day, scene 13 entitled L’Ombre Double (literally : the double shadow) because of the shadow of a man and a woman together projected onto a wall. So the inspiration for Boulez comes from this specific scene, not the work as a whole. In the play the double shadow is treated as a single character. In Dialogue de l’Ombre Double a solo live clarinet (called clarinette première) placed in the middle of the hall dialogs with a kind of shadow of itself. The shadow is the pre-recorded clarinet (called “clarinette double”) which is spatialized over a six point loudspeaker system placed on the periphery of the hall. The audience is placed between the solo clarinet and the loudspeaker system. 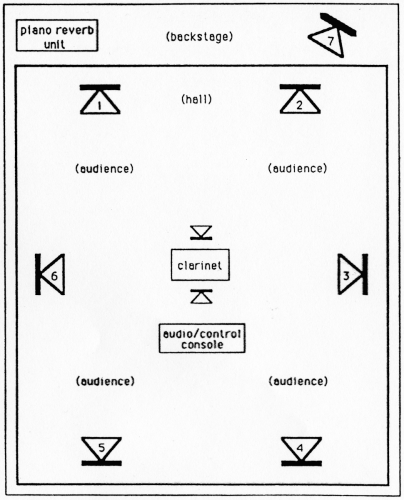 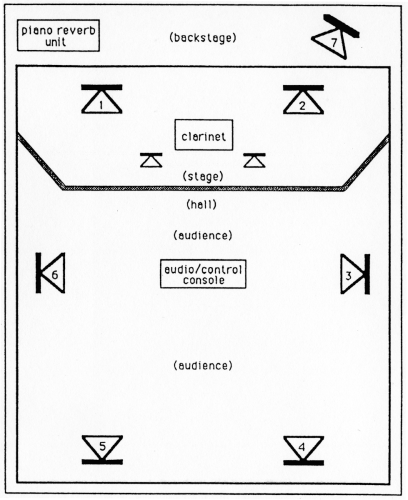 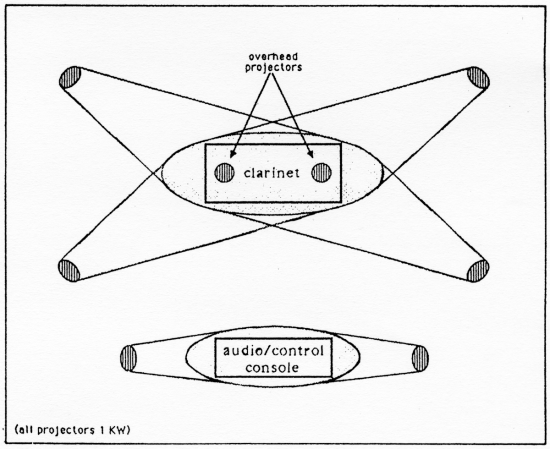 During the strophes, the clarinet may need to be amplified with the aid of a microphone and two speakers placed near the performer. If the acoustics of the hall are excessively dry, the clarinet’s sound is reverberated slightly. 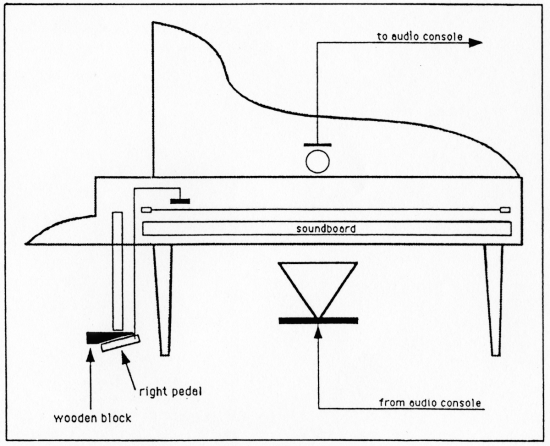 The clarinet should be recorded on track one of the tape. The transitions are played back through six equidistant speakers (referred to as speakers 1 to 6) surrounding the audience and one speaker placed outside the circle (referred to as speaker 7). This last speaker, used only at the end of the last tape section of the piece, should sound distant and may therefore be placed outside the hall. Following the cues marked in the score, the pre-recorded clarinet sounds are to be sent around the hall from one speaker to another giving the listener the impression that the sounds are moving in physical space. Hereafter, this will be referred to as “spatialisation”.

The figure below shows the complete electronic setup necessary for a performance of Dialogue de l’ombre double. The equipment surrounded with a dotted line (the VCA control unit, the control computer and the SMPTE decoder) is necessary only if the spatialisation is to be done automatically. 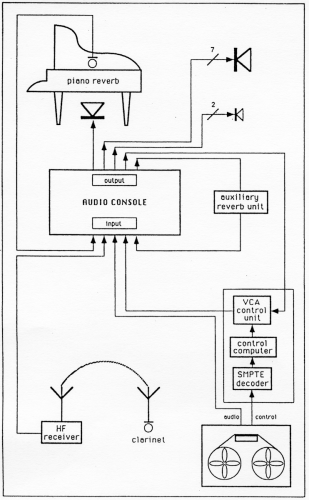 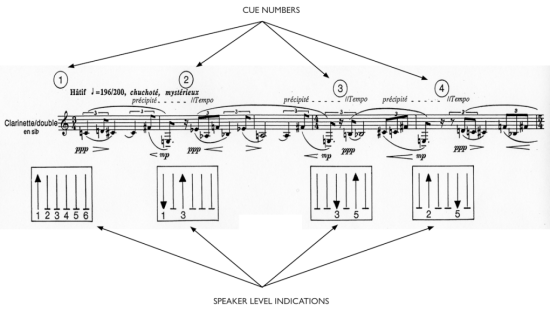 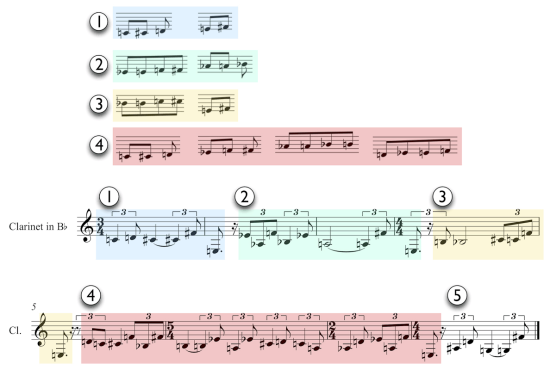 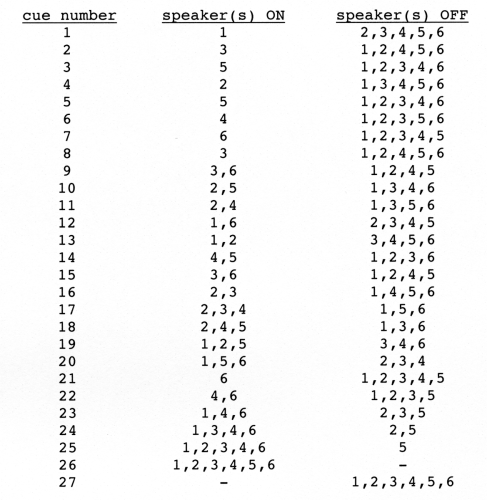 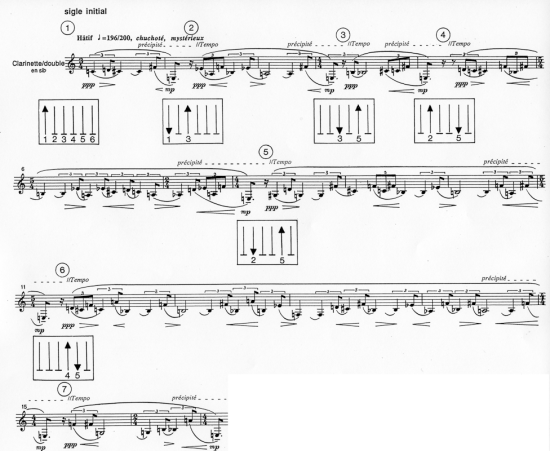 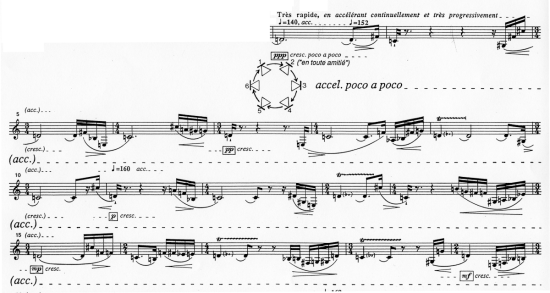 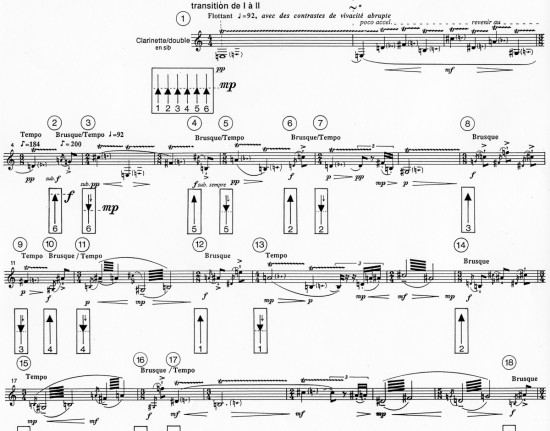 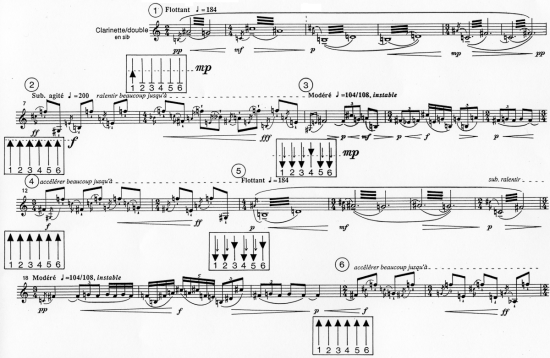 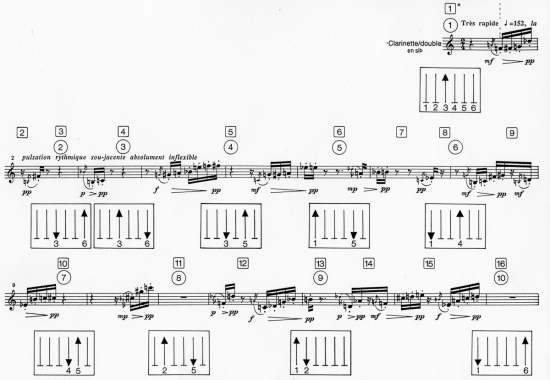 More on the work “Dialogue …” in