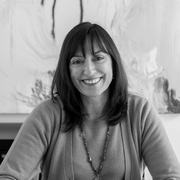 Ana Lara was born in Mexico in 1959. She studied composition with Daniel Catán and Mario Lavista at the Conservatorio Nacional de Música in Mexico City from 1982 to 1986. In parallel, she studied piano with Leopoldo González and voice with Charles Laila and Rosa Rimoch. From 1984 to 1986, she also took part in a composition workshop led by Federico Ibarra Groth at the Centro Nacional de Investigación, Documentación e Información Musical Carlos Chávez (CENIDIM) at the Instituto Nacional de Bellas Artes of Mexico City. From 1986 to 1989, she traveled to Poland on a joint fellowship from the Mexican and Polish governments to undertake postgraduate studies in composition at the Chopin University of Music in Warsaw with Włodzimierz Kotoński and Zbigniew Rudziński. Later on, from 2002 to 2004, she earned a masters degree in ethnomusicology from the University of Maryland in College Park, Maryland.

Lara composes in a wide variety of genres, for many types of ensembles. Her catalogue includes works for soloists and for orchestras, as well as chamber music and vocal pieces, electroacoustic compositions, orchestral pieces, operas, musical theater pieces, and collaborative works with dance companies.

She has received commissions from numerous institutions and ensembles around the world. Her string quartet Au-delà du visible was commissioned by the Louvre and the Diotima quartet. Malgré la nuit for prepared piano, percussion, and electronics, was a joint commission from the CIRM and GRAME. Her orchestral piece Dos Visiones was a joint commission from the Long Beach Symphony Orchestra and the Mexico National Symphony Orchestra.

Her compositions have been performed in Latin America, North America, Japan, and Europe. In 2014, her chamber music repertoire was honored at a special evening at the Théâtre Graslin in Nantes, on the initiative of Ensemble Utopik.

Lara describes her music as “international and abstract, but deeply Mexican in its soul.” She cites Arvo Pärt and Henryk Górecki as key influences on her work, and her musical grammar includes microtonality, heterophony, and explorations of continuous sound and amplitude.

In addition to composing, Ana Lara is active in several other fields in the realm of music: between 1986 et 1992, she contributed to the music journal Pauta. From 1989 to 1995, she served on the editorial board of the music journal Heterofonía. From 1989 to 2003, she has produced the radio show Hacia una nueva música, which showcases contemporary music and is broadcast by the radio station of the National Autonomous University of Mexico (UNAM).

Lara is also highly supportive of the contemporary arts. In 1989, she founded the Sociedad Mexicana de Música Nueva, serving as its president from 1989 to 1991. She then went on to found the Música y Escena festival in Mexico in 1998, and has served as its artistic director since that time. She was also the artistic director of Puebla Instrumenta Verano, a summer course for young instrumental musicians, in 2003-2004. In 2007, she was the artistic producer of the Universal Forum of Cultures in Monterrey (Mexico). From 2007 to 2009, she coordinated the contemporary music program for the Festival Internacional Cervantino.

Between 1989 and 1999, Lara worked as a record producer, and in 2000 was nominated for a Latin Grammy Award in the cateogry of “Best Producer of a Classical Music Album.”

In 2016-2017, she served as Cultural Attachée of Mexico in France, as well as directing the Mexican Cultural Institute.