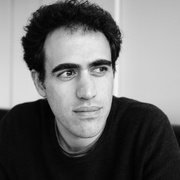 Adam Maor came to music through studies of the guitar at the Haifa Conservatory, going on to study composition with Eitan Steinberg at the same institution. He was imprisoned for a period of almost two years (from Winter 2002 to Autumn 2004) as a conscientious objector to Israel’s compulsory military service. Upon his release, he continued his engagement in political activism, for which he was nominated for the Ypres Peace Prize in 2005.

He later undertook further study of composition with Michael Jarrell, Luis Naón, and Éric Daubresse (electronic music) at the Geneva University of Music (HEM). He went on to participate in the IRCAM Cursus (IRCAM’s composition and computer music course) in 2011-12, concurrent with studies of the oud with Michel Arkach at the Conservatory of Eastern Music in Paris.

Adam Maor’s work fuses elements of Western contemporary music with traditional Arabic musics. He is also deeply influenced by Israeli culture. Several of his pieces, both vocal and instrumental, have been inspired by the poetry of Yitzhak Laor, with whom he has collaborated on numerous projects. His music is often also an extension of his political activism: Occupy Haifa (2012) for fixed media evokes the Palestinian and Israeli protests in Haifa in 2011; I, Who Never Crossed this Desert (2015) for percussion trio and electronics compares the contemporary displacement of refugees with the history of the Jewish people; and the opera Les Mille Endormis (2019) presents a political fable on the Israeli-Palestinian conflict, coproduced by IRCAM and premiered at the Aix-en-Provence Festival.

Maor currently teaches electronic music at the Musrara Naggar Multidisciplinary School of Art and Society in Jerusalem, and is Assistant Director of the Tzlil Meudcan Festival in Tel Aviv. His works have been performed by ensembles such as Contrechamps, Interface, and the Souflé Duo, and soloists including Barbara Maurer from Ensemble Recherche and Luca Leracitano from MDI Ensemble. His works have been programmed in festivals in Europe, Argentina, and Israel.