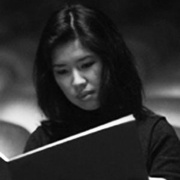 Born in Tokyo in 1969, Misato Mochizuki studied theory, piano and composition at the University of the Arts in her hometown, graduating in 1992 with a Master’s Degree in Composition. She undertook further study of composition at the Paris Conservatoire (CNSMDP), graduating in 1995 with highest honours and going on to pursue an advanced degree at the same institution with Paul Mefano and Emmanuel Nunes. In 1996-97, she participated in the IRCAM Cursus (IRCAM’s composition and computer music course), allowing her further study with Tristan Murail.

Since 2007, she has taught at the Meiji Gakuin Universtiy in Tokyo. She has also taught at the Darmstadt Summer Courses (2008), Royaumont (2009), the Takefu festival, and the Amsterdam Conservatory.

She has been awarded numerous accolades, including the “Grand Prix” and the Yasuda Prize in the 64th Japanese Music Competition in 1995, a Stipendien Preis from the Darmstadt Summer Courses in 1998, the Akutagawa Prize for the Best New Work for Orchestra in 2000 for Camera lucida, the Ars Musica Festival Prize (Brussels) in 2002 for Chimera, the Otaka Prize for the Best Work for Orchestra in 2005 for Cloud nine, the International Rostrum of Composers Prize in 2008 (Dublin) for L’heure bleue, and the Heidelberg Female Artists’ Prize in 2010.

Combining Western and Asian traditions, Mochizuki’s music is characterised by its formal and stylistic freedom, as well as by its nuanced treatment of sonic colour, betraying influences of (in equal measure) Eastern musical modes and spectral theory. Additionally, her work is marked by her interest in biology and genetics, as manifest in works such as Homeobox (2001) and Chimera (2000). Mankind and the cosmos are the focus of the works Noos (2001) and Omega project (2002), both inspired by the writings of theologian and philosopher Teilhard de Chardin. Photography is another key creative influence: works such as La chambre claire (1998) and Camera lucida (1999) evoke shifts in focus, from sharp to blurred, and the ability to capture and reproduce the ephemeral.

Underlying pulsations, sometimes inaudible (and therefore, present only in a subliminal capacity), guide the evolution of each of her works. Chimera evokes a living being with a beating heart whose “musical” cells divide/reproduce, transform and move around, giving rise to a sort of perpetual motion which evolves according to metonymic principles, i.e., the amplification of details and the transformation of peripheral figures through the addition of noise elements.

Following a period of work at IRCAM, Mochizuki started to integrate techniques of sonic morphing and cross-synthesis, which allow her to move fluidly among the timbres of traditional instruments, thereby creating a sonorous continuum (as in Si bleu, si calme [1997]).

In 2007, Mochizuki composed two scores for silent films (one by Kenji Mizoguchi and the other by Man Ray) which were premiered at the Agora Festival and Radio France, respectively. Her opera buffa, The big bakery robbery, based on short stories by Haruki Murakami, was premiered in 2009.

From 2011 to 2013, she was composer-in-residence at the Besançon International Music Festival, during which Nirai II, a pedagogical work for orchestra, was premiered (2013). In 2015, her percussion concerto Quark II was premiered by Thierry Miroglio and Ensemble Orchestral Contemporain, conducted by Daniel Kawka. Her string quartet Brains was premiered by the Diotima Quartet at the Présences Festival in 2017. In the same year, Têtes for solo vocalist and chamber ensemble was premiered in Darmstadt by Musikfabrik.