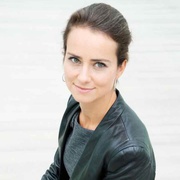 Birke J. Bertelsmeier was born in Cologne, Germany in 1981. She studied piano at the Hochschule für Musik und Tanz in Cologne with Pavel Giligov and composition with David Graham in Düsseldorf, then with Wolfgang Rihm at the Hochschule für Musik Karlsruhe, graduating in 2008. She went on to obtain a masters in musicology in 2009, then participated in Cursus (the IRCAM’s composition and computer music course) in 2016-2017.

Her compositions have been performed by Quatuor Arditi, Tabea Zimmermann, Christoph Eschenbach (with the Bamberger Symphoniker) and Ensemble Modern. She has been invited to festivals such as the Munich Biennale, the Wittener Tage für Neue Musik, and the Heidelberg Spring Music Festival. In 2012, she won the Schneider-Schott-Musikpreis, and received a fellowship from the International Ensemble Modern Academy. In 2015, she was awarded the Ernst von Siemens Composition Prize.

Birke J. Bertelsmeier’s work spans multiple genres, including opera (Ein falsches Märchen, 1995); musical theater (Gib mir Dein, 2017); film scores (Papiersammlung, 2011); orchestral works (Zimzum, 2015, … reichen Hall, 2010, Stück, 2010, Im Nu, 2009); chamber music, and solo pieces (WhirliGigue, 2010). In 2014, the Deutsche Oper Berlin hosted performances of two of her musical theater compositions, Querelle, based on the work of Jean Genet and composed while in residence at the Villa Massimo in 2013, and Nachtigall, based on the work of Oscar Wilde. In 2017, her work for orchestra vom blauen Himmel was premiered by the Orkestra Sinfonikoa de Bilbao in commemoration of the 80th anniversary of the bombing of Guernica, with adult and children’s choirs.

Birke J. Bertelsmeier teaches composition at the Beethoven-Haus in Bonnand and for the Landesmusikrat NRW, the musical council of North Rhine-Westphalia. As a fellow of the Dorothea Erxleben Program, she also taught at the Hochschule für Musik, Theater und Medien in Hanover.