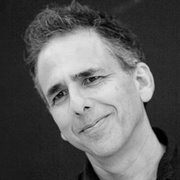 Michael Gordon was born in the United States in 1956 and grew up in an Eastern European Jewish community in Managua, Nicaragua. His early exposure to music was through Yiddish and American Indian cultural traditions; upon returning to live in the United States in the mid-1960s, he discovered the world of pop and rock. From 1974 to 1977, he studied music at the University of Florida, and from 1977 to 1982 studied composition with Martin Bresnick at the Yale University School of Music. During this time, he played with several underground rock bands in New York City.

In 1983, he founded the Michael Gordon Philharmonic in order to perform his own compositions in Europe and the United States. In 1987, he founded the Bang on a Can Festival with Julia Wolfe and David Lang, and then the Ban on a Can All-Stars, which play works of their own composing as well as from the contemporary repertoire. Gordon has on several occasions also worked with the London ensemble Icebreaker, with whom he recorded Yo Shakespeare for ensemble (1992) and Trance for augmented ensemble of eight brass instruments and voice samples, released in 1995 by Argo/Decca. In 1998, Gordon wrote the acoustic instrument arrangements for Brian Eno’s Music for Airports, which has been performed by the Bang on a Can All-Stars on several different occasions. In 2001, he, Julia Wolfe, and David Lang launched the Cantaloupe label, which issued several re-releases of their recordings as well as newer work.

Michael Gordon has received commissions from institutions including Lincoln Center, Carnegie Hall, the Stuttgart Ballet, the New World Symphony, the National Centre for the Performing Arts in Beijing, the BBC Proms, the Brooklyn Academy of Music, Settembre Musica, the Holland Music Festival, and the Dresden Festival.

Gordon has collaborated on several occasion with the filmmaker Bill Morrison, notably on Decasia (2001), a piece in which the audience is surrounded by the orchestra and by video projections. They also collaborated on a series of pieces that sought to capture a city’s ambience through music and images; Gotham, the first piece in the series, explores New York City, and was premiered in 2004 by the American Composers Orchestra, conducted by Steven Sloane. Dystopia, about Los Angeles, was premiered in 2008 by the Los Angeles Philharmonic, conducted by David Robertson; El Sol Caliente - about Miami - premiered in a 2015 performance by the New World Symphony, conducted by Michael Tilson Thomas.

Gordon has also collaborated with Elliot Caplan, who filmed his opera Van Gogh (1991), as well as a composition for orchestra and electronics titled Weather (1997).

Gordon, Wolfe, and Lang have composed several pieces together, including Lost Objects, an oratorio for baroque orchestra that premiered at the Dresden Festival in 2001, as well as two pieces for voice and ensemble, The Carbon Copy Building (1999) and Water (2008).

Most of his work is available through the labels Cantaloupe, Nonesuch, and Innova Recordings. His scores are published by Red Poppy (distribution by Schirmer).