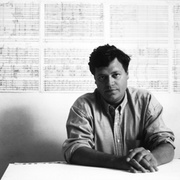 Philippe Schœller studied piano with Jean-Claude Henriot, theory and counterpoint with Béatrice Berstel, choral music in the J.S. Bach Choir with Justus von Websky, analysis with Robert Piencikowski, and conducting with Gérard Dervaux at the Paris Ecole Normale de Musique. From 1982 to 1986, he attended the classes of Pierre Boulez at the Collège de France, conservatory masterclasses with Franco Donatoni, and the open classes led by Iannis Xenakis at the École Pratique des Hautes Études. Meetings with Helmut Lachenmann at a conference in 1985 in Paris, with Henri Dutilleux in Tours in 1990, and with Elliott Carter in 1983 would prove to be significant in Schœller’s creative development. Additionally, his musical training was complimented with studies of musicology and philosophy at the Sorbonne.

Philippe Schœller teaches analysis and composition at the Lyon Conservatoire (CNSM). He has spoken at numerous conferences, and led master-classes at the Copenhagen Conservatory and Hannover Hochschule (both in 2004), as well as at IRCAM (2005). He participated in a workshop on computer music at IRCAM, and went on to undertake significant research on synthesis at the institution, with the objective of developing a new approach to instrument making which is in line with traditional practices.

His musical style evokes terms such as “colourful,” “transparent,” and “subtle,” but also “energetic,” “flexible,” “dynamic,” and “organic,” and demonstrates a profound preoccupation with detail and the desire to arouse strong emotions. These characteristics are closely tied to his passion for the “perception of textures,” e.g., waves, wind blowing through a reedbed or a forest, murmurations of starlings, clouds, or the kaleidoscopic motion of living nature. His catalogue comprises everything from stripped-down works for solo instruments, such as Hypnos linea (2007), to large-scale works for orchestra, such as Ritualis Totems (with choir; 2007) and Songs from Esstal, I, II and III, premiered at ManiFeste in 2013 by Barbara Hannigan and the Radio France Philharmonic Orchestra.

In 2014, his soundtrack for Abel Gance’s silent film, J’accuse (1919), with electronics produced at IRCAM, was premiered in a cine-concert by the Radio France Philharmonic. He has worked widely with contemporary film-makers, notably composing the soundtracks for Versailles (2008) and L’exercice de l’état (2011), both directed by Pierre Schœller, and Dans la forêt (2016), directed by Gilles Marchand.

Philippe Schœller’s music has been performed throughout the world. He has received accolades including first prizes in the Antidogma International Composition Competition in Turin in 1984 and the Henri Dutilleux Competition in 1990, grants from the Natixis Foundation - Banque Populaire - Crédit National (1993-1997), the Paul Gilson Prize (2001) for Totems, and the Prize for the “Best New Instrumental Work” (2009) for Tree to Soul from SACEM, which also awarded him the Prize for “Best Music for Film” for L’exercice de l’état (2012). Two CDs of his music were awarded the “Coup de Cœur” from the Charles Cros Academy.