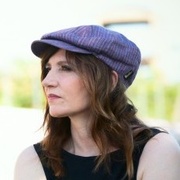 Lucia Ronchetti studied piano, composition, and electronic music, notably with Sylvano Bussotti and Salvatore Sciarrino. She went on to study with Gérard Grisey in Paris, and participated in the IRCAM Cursus (IRCAM’s composition and computer music course) in 1995-96, allowing her further study with Tristan Murail. She also earned a Doctorate in Musicology from the École Pratique des Hautes Études in Paris, under the direction of François Lesure.

She participated in the Stuttgart Staatsoper Forum Neues Musiktheater, and in 2005, was the recipient of a Fulbright grant for study at Columbia University in New York. She was awarded residencies from the Cité Internationale des Arts in Paris (1996-1997), Schloss Solitude in Stuttgart (1999), MacDowell Colony in Peterborough, New Hampshire (2003), DAAD in Berlin (2005-2006), Yaddo in upstate-New York (2007), Schloss Werdenberg in Switzerland (2013), and Villa Concordia in Bamberg, Germany (2016). In 2022-2023 she is a fellow of the Wissenschaftskolleg zu Berlin.

Theatricality (in varied forms) is at the heart of Ronchetti’s creative identity. In 1999, she composed a collection of non-staged vocal works for Neue Vokalsolisten, known as “dramaturgies,” some of which were based upon madrigal traditions, e.g., Anatra al sal (1999). These were the first in a series of works written for the group, which includes Le Voyage d’Urien, a setting of a text by André Gide (2008); Pinocchio, una storia parallela (2005); Studio detto dei venti (2010); Der Sonne entgegen, a scenic work for fourteen voices (2007); and Blumenstudien, a madrigal after Gesualdo (2013). The Dresden Semperoper commissioned a three-part, large-scale theatrical work to be premiered over three seasons, comprising Contrascena (2012), Sub-Plot (2013), and Mise en abyme (2014). Following this, Ronchetti composed several operas, including Esame di mezzanotte (2015), The Adventures of Pinocchio (2015, adapted into Italian in 2018 and German in 2020), Inferno (2018), or Das fliegende Klassenzimmer (2020).

Lucia Ronchetti has received numerous accolades. Her chamber opera Der Sonne entgegen, for fourteen voices (2006), was awarded the Experimentelles Musiktheater NRW Fund Prize in 2006 and the Music Theater Now Prize from the Berlin International Theater Institut in 2008. A new version of this work was premiered at Maerzmusik in 2010 with support from the Haupt Stadt Kultur Fund. Ronchetti was also awarded the Künstlerinnenpreis from the City of Heidelberg in 2013.

Lucia Ronchetti teaches music theory, counterpoint, and composition at the Salerno Conservatory, and has appeared as a guest at numerous seminars in Europe, the United States, Latin America, and in Johannesbourg. Lucia Ronchetti has been appointed Director of the Venice Music Biennale for the period 2021-2024, succeeding [compose:1269][Ivan Fedele].