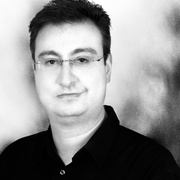 German-Jordanian composer born in 1972 in Jordan.

Saed Haddad was born in Jordan in 1972 and studied piano from early childhood. He studied philosophy at Beit-Jala and then at the University of Louvain from 1989 to 1993, then returned to Jordan to study music at the Jordan Academy of Music from 1993 to 1996. He received a degree in composition from the Jerusalem Academy of Music and Dance, where he studied from 1998 to 2001, and a doctorate in composition from King’s College, London (2002-2005), where he studied with George Benjamin, among others. He also participated in masterclasses with Louis Andriessen, Helmut Lachenmann, and Pascal Dusapin.

After exploring, in works composed in 2004-2006, the question of his identity and the influence exerted on it by Arab traditions and by the Western European countries in which he made his home, Haddad turned in his work to questioning ideas of forgetting and distance within his own tradition.

He has received commissions from prestigious ensembles and orchestras in Europe, North America, Asia, and Africa. Daniel Barenboim and the West-Eastern Divan Orchestra and the Lucerne Festival commissioned his Triple concerto which premiered in August 2013. 2e2m devoted a major retrospective to him in their 2012-2013 season.

Haddad has been a composer in residence and guest lecturer at numerous universities and festivals including the Donaueschinger Musiktage, the Lucerne Festival, the Wienerkonzerthaus, the Salzburger Festspiele, the Festival d’Automne, the Festival Présences, and the Aldeburgh Festival.

His awards and honors include the French and German Prix de Rome (the Villa Médicis and the Villa Massimo) in 2008-2010, the Deutsche Schallplattkritik Prize in 2010, the Koussevitzky Music Foundation Commission-Library of Congress award in 2014, and the Foundation Coupleux-Lasalle Prize in 2015.